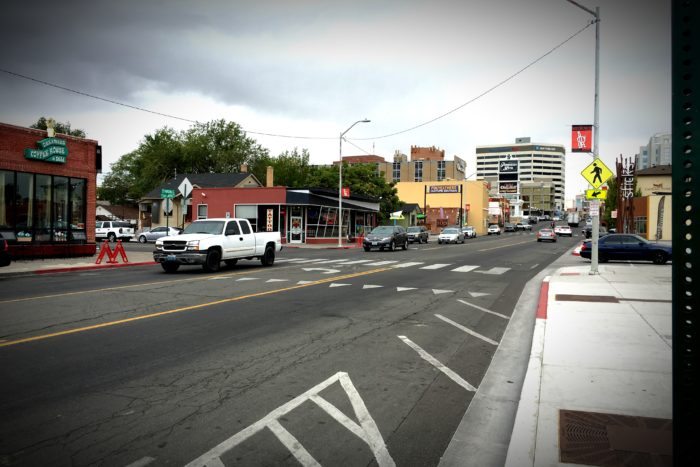 The Regional Transportation Commission (RTC) announced this week that it is holding a new hearing on street designs for Virginia Street. The project has already seen years of meetings and public input.

“Due to concerns expressed recently to the RTC by some of the project’s stakeholders, the RTC Board of Commissioners will discuss the publicly preferred alternative design that was approved by the Reno City Council on Oct. 7, 2015 and by the RTC Board on Oct. 16, 2015,” said RTC’s Doug Maloy. “Specifically, the agenda includes an item that, if approved, would eliminate the design of a raised two-foot-wide center median and instead retain the existing 12-foot-wide center two-way left turn lane (TWLTL) on Virginia St. from Liberty St. to Vassar St.

“A raised median would restrict left-turn access to driveways and some intersections while a roundabout at the Center St. – Mary St. intersection would be constructed to enhance vehicular circulation.  The median design would decrease vehicle conflicts and improve safety.”

A meeting is scheduled to discuss that change on Thursday, Jan. 19, 2017 at the Washoe County Commission Chambers. It starts at 1 p.m.

“The current approved alternative incorporates the narrow median to allow for wide sidewalks (approximately 10 to 12 feet) within the public right-of-way that would accommodate street trees and other amenities in addition to reducing congestion and improving safety,” Maloy continued. “Due to the constraints of the narrow Virginia Street corridor in the Midtown area, design of a TWLTL would eliminate the wider sidewalks, street trees and other improvements.  Minimum six-foot-wide sidewalks on Virginia St. would be included and the roundabout eliminated if the redesign is approved.”