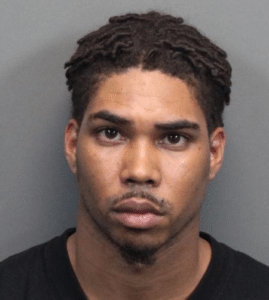 According to the D.A.:

The case against Ashley began in September 2014 when the Reno Police Department responded to a report of a domestic disturbance between Ashley and a 24-year-old Sparks woman he had been dating.

When officers arrived, they located the victim in the case and were told Ashley had left the scene.

The investigation determined that Ashley had pushed the victim several times and thrown keys and a medication canister at her.

The victim reported being 15 weeks pregnant at the time and said that at one point Ashley had pushed her over a couch armrest, which caused her to fall to the floor and land on her stomach.

The D.A.’s office said that, during Ashley’s trial, the prosecutor played a telephone call for the jury in which Ashley admitted to throwing the canister at the victim and to putting his hands on her. In addition, he is alleged to have said in the call he was “somewhat” thankful she wasn’t severely hurt or hospitalized.