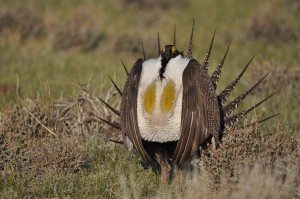 In a 16-page opinion, Du said that the plaintiffs had not demonstrated “irreparable harm in the absence of injunctive relieve.”

The counties and mineral companies presented a lengthy list of concerns in late November as part of its case against the Bureau of Land Management and the U.S. Forest Service.

Among them were areas of land declared by the agencies as sage-grouse habitat, lands that included landfills in two counties, as well as parcels in Washoe County that critics said did not have sage grouse anywhere near them.

Du responded that “even accepting that the lands identified for disposal by Washoe County and Humboldt County are on BLM’s habitat map, and even assuming that those lands will be withdrawn from disposal, such a withdrawal is nevertheless not immediate. Nor is the harm imminent and irreparable. The land disposal process is lengthy, the two Counties have not completed this process, and the planned projects do not have a clear or certain start date in the near future.”

Nevada Governor Brian Sandoval was against the state joining in on the lawsuit through Laxalt.

Sandoval announced Friday that he had negotiated directly with the U.S. Secretary of the Interior, Sally Jewell, to use Nevada’s sage-grouse habitat maps, not the federal maps considered by critics to be erroneous.

“Secretary Jewell committed to use Nevada’s new maps immediately for project-level decisions,” he said. “This assures that projects like Washoe County’s Veterans Cemetery and prospective sites for new schools are now out of the Greater Sage-grouse habitat.

“This will allow these projects to proceed under the normal development process. The Department (of Interior) is committed to formally adopt the maps in the most expeditious manner possible.”

are yet to be decided … this order addresses Plaintiffs’ Motion for Preliminary Injunction (“Motion”), which requests the extraordinary remedy of preliminary injunction to enjoin these agencies from implementing certain restrictions in their plan amendments pending a decision on the merits. Because Plaintiffs fail to meet their burden of demonstrating a likelihood of irreparable harm in the absence of the requested preliminary injunction, the Court denies Plaintiffs’ Motion.”