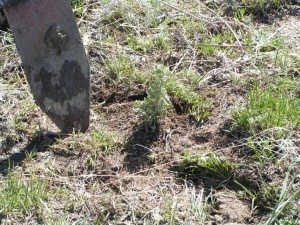 Natural Resource Specialist Kent McAdoo recently shared results from research testing the restoration of sagebrush in areas where grasses became the dominant vegetation after fire or other causes. In his published results, McAdoo, of University of Nevada Cooperative Extension, explained that sagebrush is vital for sage-grouse and other wildlife on much of Nevada’s rangelands.

“It serves as critical habitat for a number of sagebrush-associated wildlife species, including the sage-grouse, which is being considered for listing under the Endangered Species Act,” he said. “Usually direct-seeding is currently used for sagebrush restoration methods. It’s cheaper, but often unreliable.”

McAdoo, with Chad Boyd and Roger Sheley from the USDA-ARS Eastern Oregon Agricultural Research Center, spent three years testing transplants and herbicides. They hoped to learn whether transplants could work more effectively than seeding. The experiment focused on three sites around Elko, Nev., each with different kinds of grass vegetation.

The first was the site of a 2003 fire. This site had several species of native grasses and wildflowers, but virtually no sagebrush. According to McAdoo, where native perennial grasses were present along with sagebrush before a fire, the grasses naturally re-establish more quickly after a fire than sagebrush and other shrubs. Most sagebrush species do not resprout after fire; rather, they come in very slowly as seed is dispersed from surrounding sites.

The second site was dominated by cheatgrass, a non-native species that is extremely competitive with native vegetation and highly flammable. It is of very limited value to most wildlife species.

During April of each year, the researchers planted 200 sagebrush plants at each of the three sites. At each site, half of the planted sagebrush was nursery-grown, and half was sagebrush transplanted from the area around the site. Half of all the plots with planted sagebrush received herbicide application to reduce competition from the grasses.

Sagebrush transplants were more readily established at the site where the native perennial grasses grew back after the fire. Using herbicide to reduce the competition from grass resulted in better establishment and larger sagebrush transplants. All the sites showed an increase in diversity of habitat structure important to a variety of wildlife species.

“Transplanting sagebrush can be very effective and doable,” McAdoo said. “Transplants are ideal for small areas. For larger treatments like post-fire application, you can establish islands of transplanted sagebrush in key areas so the plants can provide a seed source over time and recolonize the site.”

McAdoo said directly planting sagebrush over large areas would be cost-prohibitive. However, because sagebrush transplants are often more reliable than seeding, especially on lower-elevation sites with limited precipitation, he said transplants should be considered as a viable option for increasing vegetation diversity.

McAdoo’s study, “Site, Competition, and Plant Stock Influence Transplant Success of Wyoming Big Sagebrush,” was published in Rangeland Ecology & Management and can be found at http://www.srmjournals.org/doi/full/10.2111/REM-D-12-00136.1.