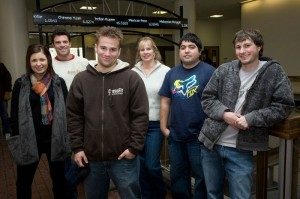 Team Aerial, a group of University of Nevada, Reno business students, made its mark in the recent international GLO-BUS competition, a simulated online competition that focuses on competitive business strategy, finishing the competition in a tie for firstout of 1,402 teams from 94 different colleges and universities around the world.

Professor Rafik Beekun’s Management 496 class divided itself into 12 teams, all of which competed against each other and other schools in the competition. The teams were in charge of a virtual camera company and made decisions regarding their company’s marketing, products and costs each week. At the beginning of the fully online exercise, all teams’ companies were given equal sales volume, revenue, profits and brand recognition. Each week, teams rose or fell in the company rankings, based on the decisions they made.

Teammates Stephen Graves, Jon Ansolabehere, Maureen Mensing, Jace O’Mallan, Jonathan Pluvinet and Katie Keating, who comprised Aerial, developed a strategy of evaluating their competitors before each weekly deadline, trying to guess what moves the other “companies” would make and making their own decisions accordingly.

“We tried to be one step ahead, so we could be proactive and lead the course instead of having to react to all the other teams all the time,” said Graves, the team leader and a December graduate with a dual international business and management major.

Beekun has had students participating in GLO-BUS for 15 years, but this is the first time one of his teams has reached this level of success. He said one of the most essential factors behind their achievement was Aerial’s ability to work cooperatively as a team.

“I’ve had ‘A’ students [in the competition] before who did poorly because they lacked teamwork and leadership skills,” Beekun said. “But Aerial was great in that area.”

“It’s very eclectic,” he said. “We have management, marketing and film majors being placed in one team. Undergraduates and graduates work together. All of those different perspectives must come together to create a successful company.”

Beekun expects the collaborative aspects of GLO-BUS to help students in their careers later on.

“This is the best learning experience because it forces them to work with different kinds of people from many different disciplines, like they will have to do in the real world,” he said.