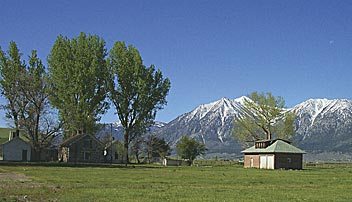 MINDEN/GENOA — Nevada State Parks invites the public to attend free stargazing events on Saturday, August 15, at the Dangberg Home Ranch Historic Park in Minden, and on Friday, August 21, at Mormon Station State Historic Park in Genoa. Both events begin at 7:00 p.m. and end by 10:00 p.m.

Members of the Astronomical Society of Nevada are providing telescopes for the public to view Jupiter, Uranus, Neptune, a comet and various galaxies, star clusters and nebulas. The public is welcome to bring telescopes as well.

Visitors are encouraged to bring bug repellant, a flashlight with a red lens, a blanket, lawn chairs and a light jacket.

The Dangberg Home Ranch Historic Park, located just west of Minden in Douglas County at 1450 Highway 88, features several historic buildings constructed between 1857 and 1920, including what was once one of the most prominent homes in Carson Valley. The site was settled in 1857 by Carson Valley pioneer Heinrich F. Dangberg, Sr.

Mormon Station State Historic Park is located in the center of Genoa at the intersection of Genoa Lane and Foothill Road. The stargazing event will be held in the northern portion of the park.

Five things to do this week: Role playing games and...

Five events to check out: Is brunching a sport?

Five things to do this week: Omicron rising edition

Nevada governor: No masks at events that require vaccines