Rabbi Mendel Cunin and Reno City Council member Naomi Duerr lit the first candle on the Menorah for Hanukkah during the traditional Menorah Lighting Ceremony Thursday night at Reno City Plaza. The small gathering was attended only by press, the Rabbi’s family and a few associates and family members of the speakers.

According to a statement from the Chabad of Northern Nevada, where Rabbi Cunin is a faith leader, “The menorah lighting plays a key role in the celebration of the Jewish holiday Hanukkah, the Festival of Lights. The lighting commemorates a miracle in ancient times when a day’s supply of consecrated oil burned for eight days during the rededication of the Holy Temple in Jerusalem” and also “symbolizes the victory over darkness.”

When asked by This Is Reno what he would like the general public or people not familiar with the traditional Jewish celebration to take away from the ceremony Rabbi Cunin said, “People are observing their religion in public; they are not shy about it. They are proud of it. You focus on the candles and see the story they are telling: light overcoming darkness, the story of hope overcoming despair.”

The Rabbi’s sentiment was echoed by Duerr.

“I would hope that people would realize we are out bringing hope to our people, all of our people. The Menorah is beautiful.” 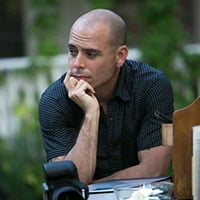 Eric Markshttp://ericmarksphotography.com/
Born in 1971, Eric Marks was fortunate enough to grow up in a time and family where photography and literature were normal parts of his life. His parents were always enthusiastic and supportive of his photography as a child, and encouraged him to read and write as much as possible. From 2005 to 2012 he owned an award-winning, international, high definition video production company, and has produced video and photography in over 14 different countries on four continents. Eric majored at the University of Nevada, Reno in English/Writing and Art, graduating with English and Photography degrees in 2013, and again with an Art degree in 2018. He teaches all genres of photography at Truckee Meadows Community College, is a freelance photojournalist for several publications, and offers private photography instruction.