Home > Featured > It’s Time to Get your Flu Vaccine
Featured

It’s Time to Get your Flu Vaccine 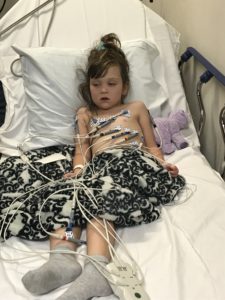 The face of the flu: Snapshots of Byerman’s then 4-year-old daughter in the ER last year while battling flu.

If last year is any indication, you don’t want to take a chance with this potentially deadly disease. According to the Centers for Disease Control (CDC), the 2017-2018 flu season wasn’t just bad, it was the worst we’ve seen in 40 years. An estimated 900,000 were hospitalized — almost 1 million people, due to something that can be prevented with a flu vaccine.

Of those, 80,000 Americans died of flu and its complications last winter.

That’s almost double the number of people estimated to die the same year in car crashes. Tragically, 181 were children, and it’s possible that number will go up once all the reporting is completed. Approximately 80 percent of these deaths occurred in children who had not received a flu vaccination.

Reno’s Mikalee Byerman considers herself blessed to not be part of that statistic. Her young daughter was hospitalized at the very beginning of last year’s flu season — on Oct. 16, making her one of the first local recorded hospitalizations.

“I’ll never forget the sound of her trying to breathe,” she recalled of her then-4-year-old daughter. After a day battling a high fever, that night the fever turned into a struggle for breath, which is when she rushed her to the ER. “When we were admitted, I heard the term ‘hypoxia,’ which at the time I didn’t understand meant a life-threatening lack of oxygen to her organs. Her little organs were struggling to work, and the flu was responsible.”

Byerman and her family get the flu shot every year religiously, but that year, they were just a little late. “Life gets in the way,” she said. “But it can’t. I didn’t realize that every day I waited, I was putting her life at risk. I’ll never be late again.”

As she held bedside vigil in the hospital watching over her sick child, Byerman also contracted the flu.

“Before this experience, I think I thought I had the flu before,” she said. “But I hadn’t. Once you have the actual flu, you’ll never forget. It was the sickest I’ve ever been — the intense pain everywhere, the sore throat like I was swallowing razors, the fever.”

Immunize Nevada Executive Director Heidi Parker agrees that many have misconceptions about the flu.

“This is not just a bad cold or headache,” she said. “Flu can be deadly. But a flu vaccine can literally save your life or the life of someone you love, which is why almost everyone 6 months and older should get a flu vaccine every year.”

The CDC recommends getting the flu vaccine as soon as possible after it becomes available — ideally by the end of October, as it takes about two weeks for antibodies to develop and provide protection.

For 2018-2019, CDC recommends the use of any licensed, age-appropriate flu vaccine as an option for vaccination, including:

Nevada has many locations for no-cost flu vaccinations, many of which can be found at immunizenevada.org/flu/flu-vaccine-locations. There, you can input your zip code to find a list of nearby facilities offering the flu vaccine.

The CDC recommends that those who do get the flu stay home for at least 24 hours after their fever is gone, except to get medical care or necessities.

“We were home — basically quarantined — for 12 days after we left the hospital,” Byerman said. “Anyone who’s ever met a 4-year-old knows what a nightmare 12 days of being homebound might be. But at least she was alive. I’ve never in my life appreciated 12 days more.”

Local emergency physicians urge you to get vaccinated (sponsored)