Small Businesses Use Social Media to Strike Back Against Shoplifters

By Bob Conrad July 5, 2017
Despite new security measures, such as warning signs about cameras throughout the store, Happy Happy Joy Joy is still catching shoplifters in the act. 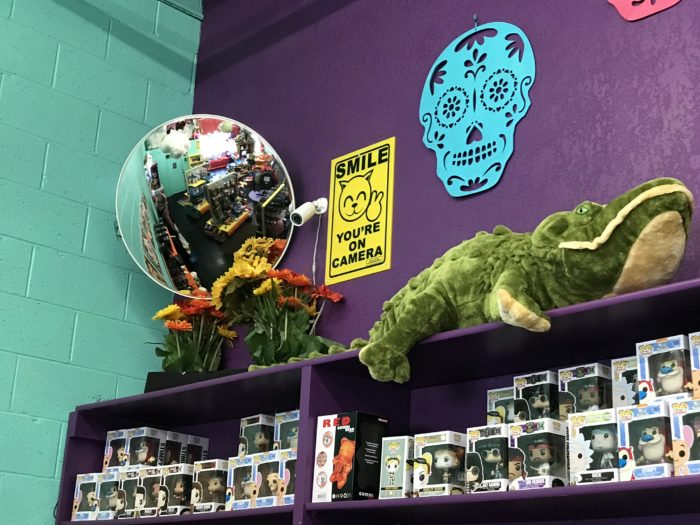 Despite new security measures, such as warning signs about surveillance cameras throughout the store, Happy Happy Joy Joy is still catching shoplifters in the act.

Midtown’s small business owners are taking matters into their own hands when it comes to dealing with shoplifters. A rash of thefts in the area is forcing businesses to out thieves publicly online by posting images and videos of shoplifters in action.

While shaming the thieves has gotten merchandise returned, along with an occasional begrudging apology, these activities are not necessarily deterring theft.

Her store has been ripped off at least five times since December 2016. In each case, she posted video of the shoplifting on Instagram and Facebook in order to identify the thieves. She said she has video of two separate cases where adult women shoplifted in the presence of children they brought to the store.

In another case, two male adolescents entered the store and one walked away with a mug — again, all captured on video. In that case, Dixon filed a police report. She said that there is now an outstanding warrant for the thieves.

“I believe that most folks are honest but it still pains that there will always be bad mixed in with the good.” — Heather Dixon, Happy Happy Joy Joy 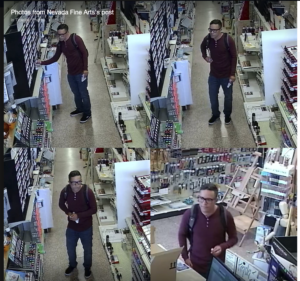 Nevada Fine Arts said in May that this individual stole $2,000 worth of merchandise.

Nevada Fine Arts posted in May security camera images on the business’s Facebook page of two people who allegedly stole $2,000 worth of merchandise. Other businesses that have reported being victimized in the past year are Neverender Reno, Sup, Green Rush, and Virginia Street Antique Mall.

Profit margins for small business owners can be slim, and recurring theft may mean making the decision whether to stay in business.

“It’s very disheartening for me, the owner of this small independent business, when theft happens,” Dixon said. “I operate my shop with one part-time employee and my investors are my family. Any loss that occurs comes out of our pockets. Insurance won’t cover these things, and even if it did it would not be worth it to have our premiums raised.

“For those that understand loss to be tax-deductible, that option is only viable when the business is making a profit. All of our revenues go directly back into payroll, inventory, marketing, etc., and all budgets are decreased with theft.”

Shoplifting costs businesses nationwide more than $45 billion a year, according to a national organization devoted to the problem of shoplifting, the National Association of Shoplifting Prevention. The group posted on its site that shoplifting is an ongoing problem despite businesses having security cameras.

“Even with all the advances in security measures, shoplifters are only caught once in 49 times they steal and when caught, turned over to the police only 50 percent of the time,” according to the association. “This is due, in part, to the fact that there is a trend away from shoplifter apprehension and prosecution by retailers, law enforcement, and the courts as a way to cope with increasing costs, time issues, and legal liability. These issues and others lead to the majority of shoplifting incidents going unrecognized, unreported, and unresolved … thereby perpetuating the problem.”

The association said that one in 11 people are shoplifters, and most of those people are adults; 75 percent, in fact. Shoplifters don’t necessarily steal because of greed or poverty.

The crime is “about people struggling with their own personal conflicts and needs,” the group explained. Depression and impulse control disorders could be contributing factors.

The association has a confidential self-help section available on its website: http://www.shopliftingprevention.org/what-we-do/self-help-and-support-center/

For Dixon, however, just trying to get back her stolen merchandise means she has to play cop, something that she said interferes with being able to provide good customer service.

“I really do enjoy owning my own business, especially in Midtown among so many other fantastic small businesses,” she explained. “I am proud of the fun place Happy Happy Joy Joy has created in this community and hope we are here for many years to come. I believe that most folks are honest but it still pains that there will always be bad mixed in with the good.”

‘Tis the season for Death & Taxes