By Bob Conrad Published: June 20, 2017Last Updated on April 11, 2019
A local family now has a home after living in the homeless shelter since February 14. Image: The Abbi Agency. 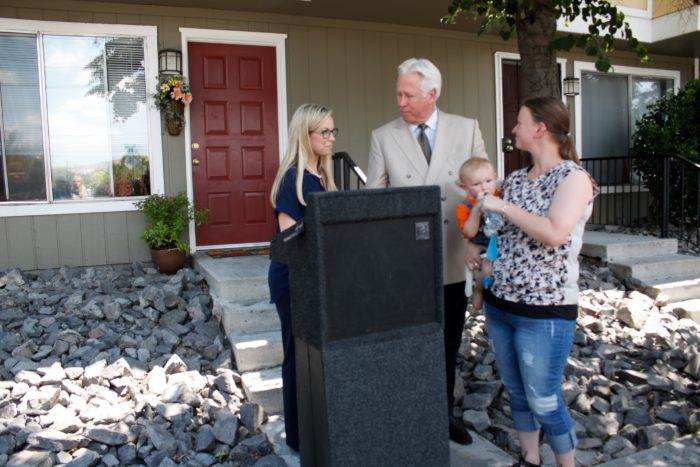 A local family now has a home after living in the homeless shelter since February 14. Image: The Abbi Agency.

Jacobs Entertainment, a Colorado Corporation that runs the Gold Dust West Casino, recently purchased a series of parcels west of downtown to develop affordable housing and an arts district. In the process, the company made a $1.5 million donation to the Reno Housing Authority for affordable housing in the Reno-Sparks area.

Now, a condo on East Ninth Street will house a local family and graduate of the city’s Reno Works program.

“We are pleased that we are able to move quickly and complete multiple acquisitions within six weeks of our agreement with the Reno Housing Authority,” said Jeff Jacobs, Jacobs Entertainment’s CEO. “Reno badly needs decent and affordable housing. The public-private partnership is a step toward meeting that need.”

As many as 10 residents of two other buildings purchased by Jacobs Entertainment were left in a lurch when they were evicted by the property’s previous owner during the sale process.

Jacobs Entertainment stepped in to halt the evictions, but residents were unaware that the company was offering relocation assistance until it was reported on ThisisReno. (We interviewed two residents and Jennifer Cassady with the Reno Initiative for Shelter and Equality at the time of the evictions. Portions of those interviews appear in our recent podcast.)

A representative of Jacobs Entertainment said at the time that it was never the company’s intention to displace the residents.

Today’s announcement by the company, during a press conference with Reno Mayor Hillary Schieve, shows a $400,000 investment, of the $1.5 million, by Jacobs Entertainment earmarked for affordable housing in the region.

“The city is excited to welcome a family into a home thanks to the public-private partnership between the Reno Housing Authority and Jacobs Entertainment,” Schieve said.