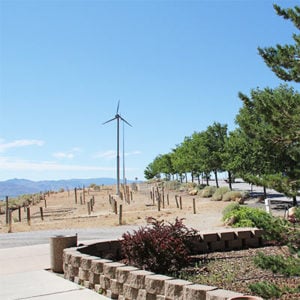 Gardening might be the last thing on one’s mind in December but members of the Truckee Meadows Community College (TMCC) Garden Club met Wednesday about plans to green-up the inside and outside of campus in the near future.

Tentative plans are to have a garden underneath the windmills by the Sierra Building, along with several gardens indoors that would be maintained on a schedule by members of the Garden Club, which consists of students and staff.

“All those fake plants, they can go,” said Helen Scott, TMCC Welcome Center manager. “They’re beautiful and amazing, but…”

Herbs and the spiderette offshoots from spider plants were favorable options discussed for indoors as the club opted against deep-rooting plants due to irrigation issues. Also known as Chlorophytum comosum or airplane plants, spider plants are prolific growers and plentiful in the campus library. They have also been shown to reduce indoor air pollution.

“We want to create plots people can buy and grow their own food,” said McCown, a computer science major. “There would also be a large club plot to grow and provide food.”

Members of the TMCC student government also have shown an interest in planting two fruit trees on campus and asked grounds supervisor Dave Murray what he recommended. Murray said apple trees would be best.

“They’re tough and they survive well here,” Murray said. “Any tree you plant, though, the first year or two, you have to take special care. But after that, it’s maintained like any other plants.”

Murray cautioned against stone fruit, such as peaches, nectarines, plums and apricots because such varieties sometimes struggle to produce locally and don’t do well in wind-prone areas.