Home > Featured > POLICE: No Charges Filed Against Person Who Drove Through Crowd of Protestors (Updated)
Featured

POLICE: No Charges Filed Against Person Who Drove Through Crowd of Protestors (Updated) 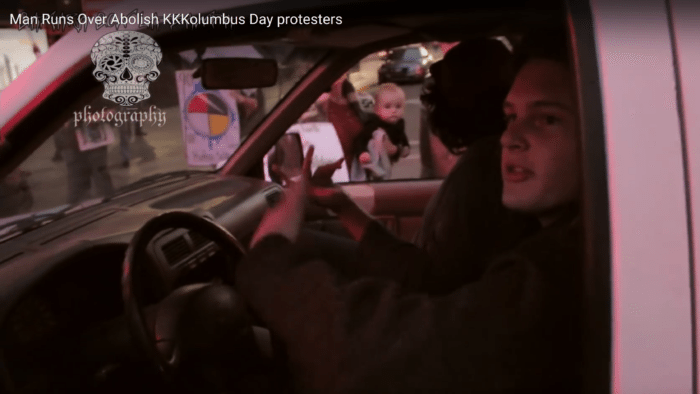 Image: Youtube screen grab from Camera With The Band’s video.

Reno Police Chief Jason Soto said today that no charges have been filed against the driver who drove through a crowd of protestors yesterday under the downtown arch.

UPDATE: Oct. 12, 2016: Soto said today that affidavits are being prepared and possible charges may be forthcoming.

Soto said that the driver called police after driving through the crowd. Plowing through the crowd injured five, sending one person to the hospital with non-life-threatening injuries. The other four did not get treatment for minor injuries, according to the Reno Police Department (RPD).

Dramatic videos online show much of the incident (watch videos below). Witnesses said that two young males were driving a white pickup and were allegedly taunting the protestors, yelling “Go to hell motherfuckers,” to then later drive up to where they were gathered on Virginia Street.

Those siding with the protestors are calling on police to charge the driver with a hate crime. Others are viewing the incident as self-defense by the driver.

“If you want to protest on the sidewalk…you can protest all day long,” Soto said. “Once you congregate in the street there is a law for unlawful assembly,” Soto said. He added that the protestors did not have a permit for the protest last night.

Soto repeatedly said that the incident is an ongoing investigation. The driver was not taken into custody but was interviewed by police, he said.

Mayor Hillary Schieve later today issued the following statement on behalf of herself and the City Council: “This incident is troublesome and saddens us deeply. I take these matters very seriously, and I believe they must be investigated thoroughly and promptly. Public safety is our highest priority, and I want all Reno residents to know that we are working swiftly and diligently to make sense of the events that took place last night. Please be advised that the Reno Police Department will hold anyone responsible accountable for their actions once the investigation has concluded.”

The incident has made national news. In online videos, protestors are seen congregating in the middle of Virginia Street as the white truck approaches. Verbal confrontations ensue, including statements like, “I’ll fuck you up,” and “I’ll tear you outta that car, you little fuck.”

“Some of the protesters were from the American Indian Movement of Northern Nevada,” said RPD in a statement. “Approximately 40 individuals were blocking Virginia Street at the arch.

Soto did not say if charges would ultimately be filed against the driver or not.

UPDATE: A statement from the mayor has been added to this story. The video of the victim in the hospital is also embedded below.