It’s called a labor of love for members of northern Nevada’s LGBTQ community.

Mayor Hillary Schieve will be on hand for a ribbon cutting along with a performance by the Nevada Gay Men’s Chorus at 5 p.m. 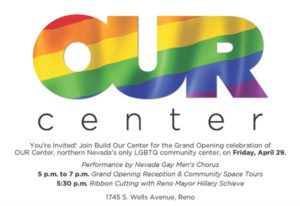 The Center opens its doors to the public the next day, Saturday April 30, and is hosting a grand opening celebration from noon to 4 p.m.

It started as a dream in 2009, when the need for a safe, empowering and supportive LGBT-specific community center was identified, and an action plan to create one was formed by a small group of individuals in northern Nevada. Since then, countless volunteer hours and monetary donations have been donated by a multitude of extraordinarily generous individuals and businesses, now bringing this dream to fruition in April 2016.

OUR Center is a 501(C)(3) nonprofit that relies solely on the support of private donations and the generosity of individuals, businesses and foundations.

‘We can never rest’ – NV groups speak about rise...

Give OUT and dance for LGBTQ+ care (sponsored)

Northern Nevada HOPES launches its annual Give OUT Day Campaign...

Cole aims to be 1st trans politician to win a...