By ThisIsReno September 11, 2014
Governor Brian Sandoval speaks to the friends, families and officials gathered to send off the 757th Combat Sustainment Support Battalion. The unit is deploying to the Sinai Peninsula in support of the Multinational Force and Observers mission.

Hundreds of family, friends, and officials gathered at Washoe 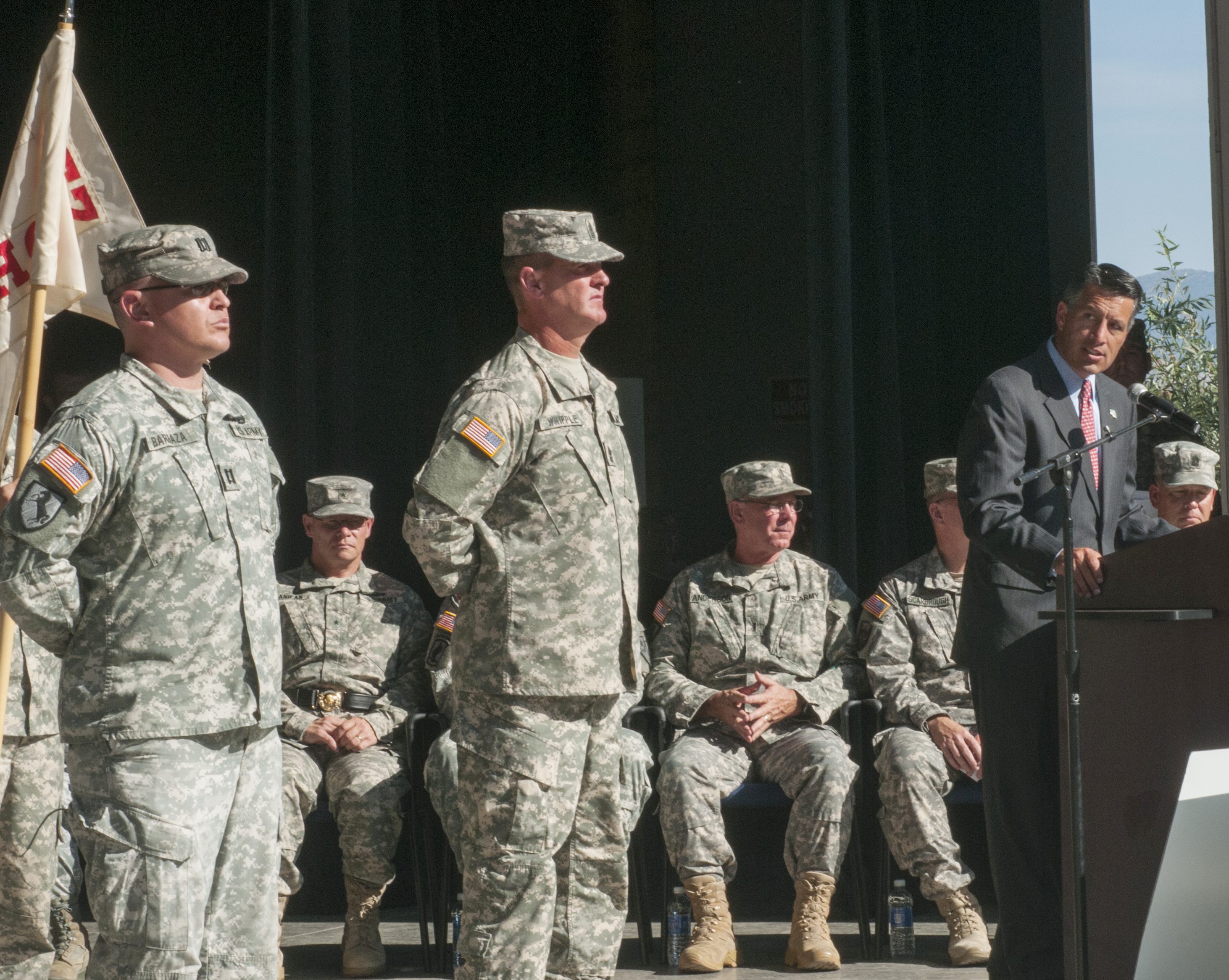 Governor Brian Sandoval speaks to the friends, families and officials gathered to send off the 757th Combat Sustainment Support Battalion. The unit is deploying to the Sinai Peninsula in support of the Multinational Force and Observers mission.

County’s Bartley Ranch Regional Park to bid farewell to about 50 Soldiers in Nevada Army National Guard’s 757th Combat Sustainment and Support Battalion today in a deployment ceremony in advance of the unit’s nine-month deployment to Egypt.

The Reno-based headquarters company of the battalion is set to travel to the Sinai Peninsula in Egypt to provide command, control, administrative and logistical support to Task Force Sinai, the Multinational Force and Observers peacekeeping contingent in the region. This is the first deployment for the 757th CSSB Headquarters Company.
The MFO contingent is stationed along the Israeli-Egyptian border, where the 757th will spend its deployment providing services such as ammunition and explosive storage, postal services  and chaplain’s corps and mortuary affair services.

The mission of the MFO is to supervise the security provisions of the Egyptian-Israeli peace treaty that was signed on April 25, 1982, and to prevent any violations of its terms.

The ceremony was held on the 13th anniversary of the terrorist attacks of 9/11. All of the speakers noted the 757th Soldiers will face a serious challenge during their deployment to a region fraught with political tension and potential violence and they also thanked the unit for doing its share to keep Americans safe at home.

“Please know on behalf of all Nevadans, we admire your dedication and respect your service more than words can convey,” said Nevada Gov. Brian Sandoval. “Today is a day of remembrance. It’s a day to pay tribute to those who lost their lives in the 9/11 attacks and also a day to pay tribute to those like you who sacrifice so much to prevent events like 9/11 from ever
happening again.”

“It is a dangerous part of the world and it will certainly face many challenges,” said Lt. Col. Wilson DaSilva, the commander of the 757th CSSB.

“But I can assure everyone that the soldiers are trained and are ready for this mission.”

Once in Egypt, the 757th Soldiers will join about 200 other service members serving on the peacekeeping force, including a National Guard medical company, an active duty aviation company, and an active duty explosive ordnance disposal detachment. The unit will be reflagged as Headquarters Company, 1st U.S. Army Support Battalion while abroad.

The unit will now head to Joint Base McGuire-Dix-Lakehurst, N.J., for several weeks of training before leaving for Egypt in early autumn.

“We’re looking well-trained and ready to deploy and conduct our mission,” said Command Sgt. Maj. Mark Rogers of the 757th CSSB. “It should be a great mission.”