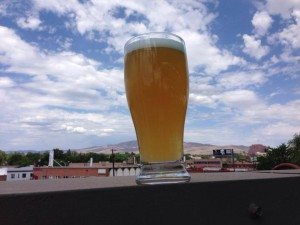 In 1999, the Lazy Eights played a show at the grand opening event of Silver Peak Restaurant and Brewery. Fifteen years later, the Lazy Eights, one of northern Nevada’s most iconic bands of the 1990s and early 2000s, reunites after 13 years apart for a show in honor of Silver Peak’s 15th anniversary of its Holcomb and Wonder Street location. The show takes place on Saturday, October 11, 6 p.m. at Silver Peak’s original location on Holcomb and Wonder Street.

The Lazy Eights are a quartet comprised of Ben Wilborn on vocals, guitar, violin and mandolin, Mike Tilton on lead guitars, Joey McKinney on bass, and Derek Smith on drums. Playing a repertoire of mostly original music, they spent almost 10 years playing locally and touring regionally, from 1992-2001.

Unlike many bands, they called it quits because they were tired, not because of any animosity between members. Since then, they have remained friends and agreed to reunite for the one show at Silver Peak.

“No human has ever successfully described the style of the Lazy Eights music,” said Wilborn. “It is an eclectic mixture ranging from incorrectly played bluegrass to more sophisticated and highly arranged pop.”

The concert will be held in the parking lot of Silver Peak and will feature the brewery’s craft beers and specialty food items. There is no cost to attend. The Derailment, the current project of Monique and Clayton Stanfield, will be performing an opening set.

Silver Peak Restaurant and Brewery opened in 1999 at its Holcomb and Wonder Street location. Owners Trent Schmidt and David Silverman then opened their second location in Downtown Reno on First and Sierra Street in 2004. In 2010, the business partners opened Slice of the Peak across from Reno Aces Ballpark on E. Second Street. Silver Peak is known throughout northern Nevada for its unique and original selection of food and beers, which area all brewed at its Holcomb and Wonder Street location.