By ThisIsReno July 1, 2014
Original Broadway Windowcard evoking the artwork of Marc Chagall, source of the title. 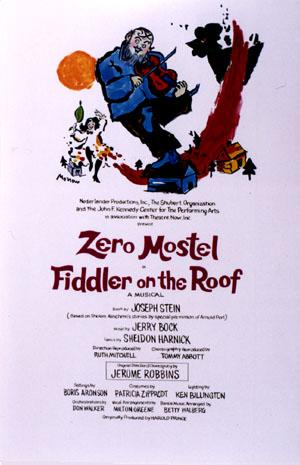 Original Broadway Windowcard evoking the artwork of Marc Chagall, source of the title.

“Fiddler on the Roof” is among the greatest Broadway musicals for any number of reasons: a score without a single dud; rich, sturdy, funny characters who somehow reward with each revisit; a high-stakes story that not only blends the personal and religious but morphs before your eyes into a meditation on change” says Chris Jones of the Chicago Tribune.

Sierra School of Performing Arts celebrates the 50th anniversary of the award-winning musical Fiddler on the Roof with a new production this August at the Hawkins Outdoor Amphitheater at Bartley Ranch, Reno. Directed by Janet Lazarus, the production takes the stage at 7:30pm August 15-17 and August 22-24, 2014. Filled with laughter and tenderness, Fiddler on the Roof has everything one could want in a classical musical theater production: an epic plot, popular songs, vivid dance movement, comedy, loveable characters and even a few tears.

Fiddler on the Roof takes place in 1905, in Anatevka, a small village in Tsarist Russia during the eve of the revolution. “The story centers on Tevye, the father of five daughters, and his attempts to maintain his family and Jewish religious traditions while outside influences encroach upon their lives,” according to press notes. “He must cope both with the strong-willed actions of his three older daughters—each one’s choice of husband moves further away from the customs of his faith—and with the edict of the Tsar that evicts the Jews from their village.” Award winning music includes such songs as “If I Were a Rich Man”, “Tradition,” “Matchmaker, Matchmaker” and “Sunrise, Sunset.”

Tickets are $20 (advance), $25 (door), $15 students/seniors and are available at www.sierraschoolofperformingarts.org or 775-852-7740. SSPA is also offering two special Saturday VIP “Nosh” Nights. Nosh Nights will include reserved seating, traditional Jewish appetizers, a beverage and a meet and greet after the performance. Tickets are $50 per person and are limited.

Fiddler on the Roof has music by Jerry Bock, lyrics by Sheldon Harnick and a book by Joseph Stein which is based on “Sholem Aleichem” stories by special permission of Arnold Perl and is presented through special arrangement with Music Theatre International (MTI). This musical is produced in part by grants from the Hawkins Foundation and the Nevada Arts Council. SSPA is a Nevada-based 501c(3) organization which aims to make quality performing arts opportunities available to all ages in northern Nevada.