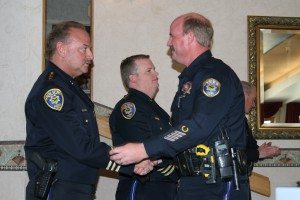 CARSON CITY — Earlier today, Reno Police Chief Steve Pitts accepted the distinguished Patriot Award from the Office of the Secretary of Defense and the Employer Support of the Guard and Reserve (ESGR) during a ceremony held in Carson City.

Governor Brian Sandoval was among those on hand to recognize Pitts, who has served as the city of Reno’s Chief of Police since March 2010. Up until that point, he was deputy chief since January 2008.

Pitts is devoted to public safety as demonstrated by his years of service and commitment to working with the community to curb crime and provide safe and livable neighborhoods for Reno residents. Under Pitts’ guidance and leadership, the Reno Police Department has demonstrated its effectiveness in dealing with complex emergencies impacting the region.

Pitts is a nationally recognized innovator, educator and practitioner in Intelligence Led Policing, Community Oriented Policing and Problem Solving and progressive police-training initiatives. He is adjunct faculty at the University of Nevada, Reno, teaching subjects as diverse as leadership, multi-culturism, community policing and problem solving, homeland security and terrorism.

During Pitts’ 35 years of service with the RPD, he has spent numerous years in major case and homicide investigations, emergency management and crisis intervention. He has more than 25 years of experience in SWAT and other special operations units and more than 15 years of command level experience.

An employee serving in the National Guard or Reserve, or the spouse of a Guard or Reserve member, may nominate individual supervisors and bosses for support provided directly to the nominating Service member and his or her family. The Patriot Award reflects the efforts made to support citizen warriors through a wide range of measures including flexible schedules, time off prior to and after deployment, caring for families and granting leaves of absence if needed. Patriot Awards are awarded to individual supervisors, not to an entire staff or organization as a whole.