Mark Twain historian to read at Sundance Books and Music 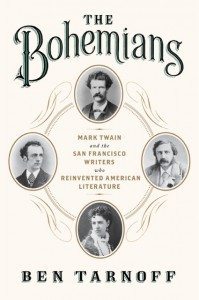 What: Historian Ben Tarnoff will read from his new book, The Bohemians: Mark Twain and the San Francisco Writers Who Changed American Literature (Penguin Press, March 2014).

The Bohemians begins in 1860s San Francisco. The Gold Rush has ended; the Civil War threatens to tear apart the country. Far away from the front lines, the city at the Western edge roars. A global seaport, home to immigrants from five continents, San Francisco had become a complex urban society virtually overnight. The bards of the moment are the Bohemians: a young Mark Twain, escaping conscription and seeking adventure; literary golden boy Bret Harte; struggling gay poet Charles Warren Stoddard; and beautiful, haunted Ina Coolbirth, poet and protectorate of this band of lost boys. Historian Ben Tarnoff’s elegant, atmospheric story tells how together these four pioneering Western writers would create a new American literature, unfettered by the heavy European influence that dominated the East.

Ben Tarnoff has written for The New York Times, the San Francisco Chronicle and Lapham’s Quarterly, and is the author of A Counterfeiter’s Paradise: The Wicked Lives and Surprising Adventures of Three Early American Moneymakers. He was born in San Francisco. His website is www.bentarnoff.com.