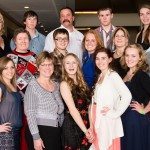 University of Nevada Cooperative Extension 4-H members represented Nevada well in three competitions at the 2014 Western National Roundup in Denver, Colo., placing in the top 10 in three competitions. The group of 11 teens, split into two teams of four and one team of three, competed against teams and individuals from 30 other states and Alberta, Canada.

“This group of kids was really fun, and eager to learn and try new challenges put before them,” Erin Lehman, an adult 4-H volunteer who traveled with the team, said. “They were a smart, well-educated group, looking to make the most of their experience in Denver.”

To place in the national hippology contest, the students needed to know about horse anatomy and internal processes, horse breeds, feed types and tools of the trade. They also had to solve a group problem, such as what to do with a mare ready to foal. And, they had to rate four horses in two breeds based on how well the horses’ body builds met the breeds’ standards.

“We got the chance to judge some of the greatest horses I have ever seen, and explain our reasoning to national judges,” team member Megan Campbell said. “I surprised myself on how I did as an individual.”

Livestock judging worked the same as horse judging, only with various other animals, such as pigs and sheep. The event also offered contests in other areas, such as public speaking and parliamentary procedure, as well as workshops in skills such as communication, team building and leadership.