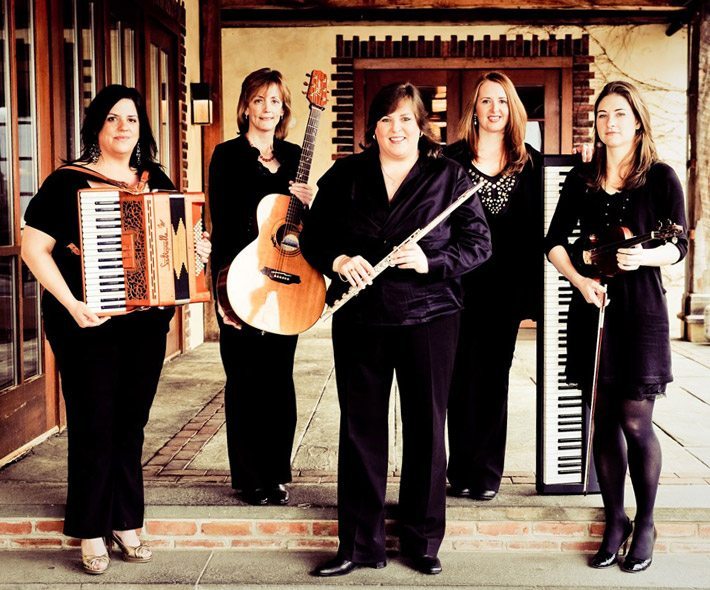 Recently honored with an avenue named after them in New York City, Joanie Madden and her four Irish-American bandmates of Cherish the Ladies have been wowing street namers, audiences and music critics worldwide for more than 25 years. The Grammy-nominated musicians bring their spirited, foot-stomping Celtic ensemble to Nightingale Hall on the University of Nevada, Reno campus, Thursday, March 6, at 7:30 p.m. for the season finale of the 2013-14 Performing Arts Series.

While hailing from New York City, Cherish the Ladies took their name from a traditional Irish jig and have become world-renowned for their traditional Celtic repertoire, spectacular blend of instrumental and vocal virtuosity, high humor, stunning step dancing and award-winning musical exuberance. They have been named Best Musical Group of the Year by the BBC, International Group of the Year by the Glasgow Royal Concert Hall’s Celtic Festival in Scotland, and Top North American Celtic performers by NPR Radio. The Irish Edition’s Philadelphia reviewer called them “…the musical equals (some would say betters) of the Chieftains. One of the finest traditional performances I’ve ever attended.”

The group’s founder and composer, Joanie Madden, grew up in a musical family and was influenced by her father, an All-Ireland Champion on the accordion. As a young musician herself, she won the world championship on the traditional concert flute and became the first American to win the coveted Senior All-Ireland Championship on the whistle. She has performed on three Grammy-winning albums and has recorded and toured with such artists as Pete Seeger, Sinead O’Connor and Don Henley of the Eagles. She was also a featured soloist on the soundtrack of “Lord of the Rings.”

Cherish the Ladies’ four additional award-winning musicians, all with strong family ties to Irish and Scottish music and culture, include guitarist Mary Coogan, accordionist Mirella Murray, fiddle player Grainne Murphy, and pianist Kathleen Boyle. The group’s “Celtic Album,” recorded in collaboration with the Boston Pops Symphony, led to a Grammy nomination, and their first American public television special, “Cherish the Ladies: An Irish Homecoming,” recorded in 2012, recently won an Emmy Award and aired in Ireland for the first time in January 2014.

For more about Cherish the Ladies, visit http://www.cherishtheladies.com

To purchase tickets online (with a convenience fee), visit http://www.unr.edu/pas. Tickets also may be purchased in person (without a convenience fee) at Lawlor Events Center, 1500 N. Virginia St., Reno, lower level entrance, Monday-Friday from 10:00 a.m.to 5:00 p.m., and at the Church Fine Arts Building box office, one hour prior to performances. For more information, call 775-784-4ARTS.

Founded in 1874 as Nevada’s land-grant university, the University of Nevada, Reno ranks in the top tier of best national universities. With nearly 19,000 students, the University is driven to contribute a culture of student success, world-improving research and outreach that enhances communities and business. Part of the Nevada System of Higher Education, the University has the system’s largest research program and is home to the state’s medical school. With outreach and education programs in all Nevada counties and home to one of the largest study-abroad consortiums, the University extends across the state and around the world. For more information, visit http://www.unr.edu.