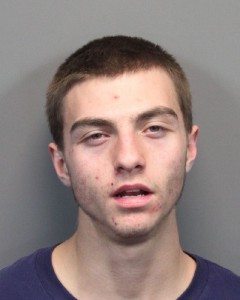 Deputies from the Washoe County Sheriff’s Office have arrested a 19-year-old Sparks man for stealing thousands of dollars worth of electronics, jewelry and other items from a residence in Cold Springs over the weekend.

At around midnight on Saturday, Dec. 14, deputies responded to a residence in the Village Parkway area of Cold Springs on a report of a burglary. Entry to the residence was made through an unlocked window, and a large loss of electronics and jewelry was reported by the homeowner.

The initial investigation revealed a suspect who was identified as Jody Michael Duarte. Duarte was located by patrol deputies on Sunday, Dec. 15, during a traffic stop and arrested on charges of Burglary, Possession of Stolen Property and Driving Under the Influence. He is being held in the Washoe County Detention Facility.

Through continued investigation, patrol deputies were able to locate the majority of the property at an undisclosed location in Sparks.

The Sheriff’s Office reminds the public to make sure all residential doors and windows are locked at all times and to secure sliding doors by blocking the track. Residents are also urged to keep a record of serial numbers and other identifying information, including photos, for all their valuables.

Additional steps residents may take to help protect themselves include:

Start by walking around your property looking for possible ways in which an intruder might get in. Check to make sure window latches and door locks are working properly.
Also look for places near entry points where an intruder might hide and wait for an opportunity to enter through an open door. Ideally, doors should not have large sections of glass that could easily be broken, giving access to an interior door handle or locks.
Keep the exterior of your property well lit at night. Without the cover of darkness, home invasion becomes much more risky, and less attractive, for a would-be thief.
Visibly post “No Trespassing” and/or “No Soliciting” signs on your property.
Stay in communication with your neighbors. Communication among residents provides extra security to your neighborhood. Any information you can share is crucial to law enforcement working to prevent crime in your community.