By ThisIsReno October 24, 2013
Caption: Steve Funk and Randy Pease stand by the Wedge- A Cheeseshop sign on the day they were chosen to be “Ca$h Mobbed.” 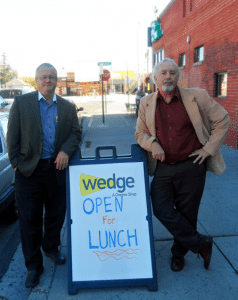 Steve Funk and Randy Pease stand by the Wedge- A Cheeseshop sign on the day they were
chosen to be “Ca$h Mobbed.”

In April 2012, Steve Funk and Randy Pease of the Reno marketing and public relations company PROBIS Ltd. were looking for a way that to use their talents to give back to the Reno-Sparks community. The result was the Reno-Sparks Cash Mob.

“At the time [we started], our community was severely depressed economically, so we asked, ‘What can we do to give back to the community?’” Funk said.

They had looked at ideas for cash mobs happening in the eastern U.S. and decided it was a great idea. The idea behind a cash mob is to have a bunch of people pledge to go spend money at a local business at a set time and day. However, Funk and Pease decided to change the parameters around a bit for their community.

“They were doing it for, like, two hours where they would go to a local restaurant and have lunch and then go to a shop and shop for an hour, and that’s a little bit of an imposition on the business owner,” Funk said. “We wanted to tailor it for our community to make sure it helped our businesses.”

“Having 50 people walk in at one time isn’t going to be a great experience for anyone—business owner orcustomer,” Pease added.

How the Reno-Sparks Cash Mob works is like this: Everyone who participates pledges to spend $10 to $20 at a locally-owned business in the area on a set day each month—a new business is chosen each month, and so far they have done this at 19 different businesses, including Recycle Records, The Great Basin Community Food Co-op, Arlington Gardens Mall, Sundance Books, Grassroots Books, Discount Office Supply, Reno Envy and, for this month, Wedge — A Cheeseshop.

“The whole concept behind the Cash Mob is really to support local businesses and to try to teach people in the community how important it is that we shop local first rather than going to Walmart or any of the other big stores,” Pease said. “And it’s primarily because when you shop at those stores, you’re sending your money out of the market, which further depresses our local economy.”

Laura Conrow, co-owner of Wedge, said she was extremely grateful for the Cash Mob’s selection of her shop for the entire month of October. Funk said that they chose the cheesehop because October is American Cheese Month, so it seemed appropriate. The selection process each month relies on nominations on the Mob’s Facebook page.

“There’s about a little over 500 members in the group, and they contribute ideas via email or [by] posting on the Facebook page about shops that they know about,” Funk said. “There’s a smaller group that picks every month. We look through what’s been recommended and we kind of sort through it. We look for, first of all, who’s got some need, how does it fit timing-wise in the community, do they have something going on that people will get interested in?”

After the business has been chosen, Cash Mob notifies its owners and begin working on spreading word on the event.

“What we do for it is just a little bit of marketing,” Funk said. “We spread the word through social media. We send out press releases. We come down the day of and put out a banner. We have a drawing box for a chance for people to win some of the cool stuff at the store that’s being ‘Cash Mobbed’ that month. We’ve designed it so that we spend a few hours a month on it, but it doesn’t overburden our business and it allows us to give back in a way that’s pretty significant and we feel really good about that.”

Funk and Pease are proud of what they have been able to accomplish with Cash Mob and were even recognized for their work this year.

“We were nominated for and received the award for ‘Best Community Project of the Year’ from the American Advertising Federation, the local chapter. So we got some recognition after just doing it for the first year, and I think that’s because it came along at just the right time. Our economy was really at the very bottom when we started doing this, and I don’t know how much credit we can take for it, but it’s been nothing but up since then. That’s all I can say,” Funk said while laughing.

“It’s all because of us,” Pease added jokingly.

The first Cash Mob, back in April 2012, was at Recycled Records before they moved to their current Midtown location; the record shop has expressed gratitude to Cash Mob.

“At the time, they were at a terrible location in a very depressed strip mall on Kietzke Lane, and they were getting ready to move up town,” Funk said. “They were on a shoestring budget, I mean things were so tight, so we decided to do the first Cash Mob there. A year later, when we got the award from the American Advertising Federation, the wife of the man who owns that store came up to us and told us how the Cash Mob at that time was the shot in the arm that helped them move to their new location in Midtown, where [their] business is doing really great.”

Funk and Pease said that the day of the Cash Mob event isn’t normally something that causes a great deal of change for the chosen business by itself, but the potential of new and returning customers offers businesses long-term benefits.

“Typically, businesses say they have a really good day,” Pease explained. “It’s not going to change the dynamics of their business, but what really helps them is all the coverage. We may only get 60 or 80 people showing up for a Cash Mob, but they see greatly increased traffic over the next few weeks. And as long as they do a good job, they’re gaining new customers that come back”

“If you figure the lifetime value of a new customer, it adds up quite a bit,” Funk said. “It continues to have reverbrative effects that just add up and add up over time.”