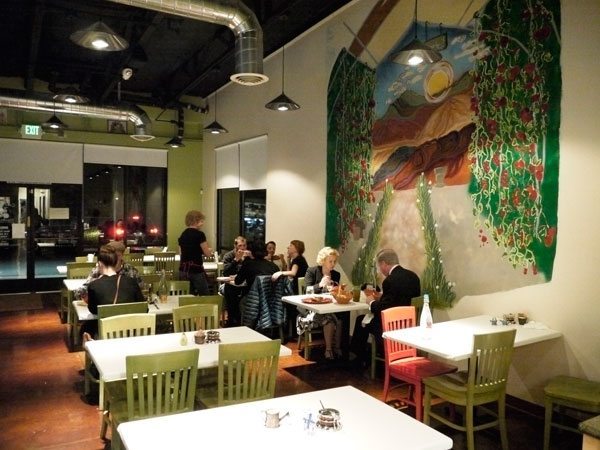 “We started with wanting to change our diets for health purposes, and we started making soups,” Juli Scala said Friday, amongst the afternoon clamor of chefs and diners in her Midtown restaurant.

When Gino and Juli Scala began selling their homemade soups in 2008, they made their first sales to fellow members of the local Bikram Yoga Studio.

“We got more and more popular,” Juli said. Gino the Soup Man was an immediate success, and as the number of flavors grew, so did the business.

Juli and Gino were soon given an opportunity to open a healthful café at the University of Nevada, Reno. Fast-forward almost six years later and the couple now own and operate two successful restaurants in Reno – Pathways Café and Great Full Gardens Café & Eatery – in addition to selling their products in a number of local venues, like Whole Foods on Virginia Street.

Juli and Gino opened Pathways Café in 2010, located in the Medical School on the north end of the UNR campus.

“Out of that we just developed our own recipes. We knew we were going to do clean healthy natural food,” Juli said. “Part of our mission is to make healthy food conventional and accessible so that people have access everywhere to really good healthy food. When I first realized that was having Pathways.”

Juli said although there was a huge demand for healthy food on campus, people initially eschewed the Scala’s business model. She said in the beginning, people – students in particular – weren’t willing to pay for or just weren’t interested in that kind of food.

Thankfully for the Scalas, this was not the case for long.

“People came from all over campus,” Juli said. “People are coming now from the bottom of campus, and that’s a trek of like five blocks, but they come up for the good food. Now [the skeptics] are amazed that we’re selling this food to the students.”

User Megan Q. on Yelp commented: “This place is delicious. I’m so glad my classes are right next door to this café. I don’t know what I would do if I had to eat another soggy burger at the overlook this semester.”

In May 2013, the Scalas went on to open the doors to Great Full Gardens in Midtown. The couple places priority in catering to special diets such as vegan, vegetarian, paleo-diet and gluten-free. They even say it has been an inspiration for them throughout this journey.

“It’s amazing when somebody comes up to you and they say they’re celiac, and they can finally find a place to eat,” Juli said.

The Scalas also work passionately to incorporate locally grown and organic ingredients. The menus at Pathways and Great Full Gardens are brimming with foods and beverages sourced from Northern Nevada. Much of their fresh produce comes from an order delivered regularly from the Great Basin Community Food Co-op, sourced from growers throughout our region. They have also been preparing seasonal picks from Lost City Farms, located just a few blocks away on Center Street, since the farm began harvesting in June.

“They have sectioned off a part of their land just for us,” Juli said. “It’s so nice.”

“We’re about 60-70 percent local,” Juli said. “There’s some things we have to source out, because I’ll take organic over local, if it’s not organic.”

That being said, the Scala’s have a close relationship with local food, and they know their farmers. Though some local farmers may not have organic certification, if the Scalas know the product is clean, they will still opt for the local counterpart.

“We were just talking about that with The Hub, because they don’t always have certified organic beans, but they’re working with farmers and farms with these smaller families that don’t even know what pesticides are,” Juli said. “They have been there and they haven’t been working with them and they have just never gone out and gotten the certification for that.”

The Scalas know about this issue in particular from their experience with their hydroponic tomato greenhouse, which supplies the business with vine-ripe tomatoes throughout the winter.

“We know from our own experience, Hydroponic cannot be certified organic, because it’s not grown in soil,” Juli said. “But we know that our product is probably better than organic, because we know that all the nutrients that are going into it are organic, there’s no soil to deal with, so we know it’s clean,” she said.

All technical jargon aside, the Scalas purely aim to provide the best food that they can get their hands on. In addition to the carefully monitored produce, the couple only serves “clean” meats with no nitrates, growth hormones or antibiotics.

“You have to have some discretion when you’re talking about organic,” Juli said. “People are very particular about that, but there’s also knowing your business and knowing where you get your product. We bring in products that are clean whether they are certified organic or not.”

The Scala’s string of businesses has come along at a profitable time for food culture in Reno.

“We’ve just been so welcomed in the community. It’s been really successful for us and we’re just happy to be a part of it,” Juli said. “There are so many people aware of what they are eating lately. I’ve got people in here 90 percent of the time that have some sort of dietary request as we like to call it, be it paleo or gluten free, they just want something clean. People are loving it and we’re building alliances. We’re all working together.”

In fact, owners of The Hub were eating in the restaurant during the time of the interview.

“I’m really thrilled to see so many people come out and support the locals,” Juli said. “We’re all just a loving community, growing and being conscious.”