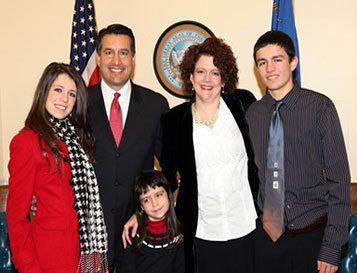 CARSON CITY -– First Lady Kathleen Sandoval today joined the Safe America Foundation to encourage Nevadans to “Text First. Talk Second.”™ when letting those closest to them know they are okay after a disaster.

“Together with Safe America, I am promoting the ‘Text First, Talk Second’ campaign and Nevada’s own Alert ID,” said Mrs. Sandoval. “The ‘Text First’ campaign urges people to use text technology as their first choice to contact loved ones during emergency situations and the Alert ID system helps make the country’s public safety information universally accessible. When combined, information can be immediately shared in a disaster. September is Preparedness Month and I encourage all Nevadans to make a plan and be prepared in the event of a disaster.”

During and after weather-related or man-caused emergencies, SMS text messages will go through before a call. Mobile calls simply overwhelm provider capacity, during these incidents. Preparedness experts universally agree that during an emergency and its immediate aftermath, communicating via SMS text messaging should be your first choice. This is because non-essential calls often shutdown wireless phone service and prevent 911 calls from getting through and emergency personnel being unable to communicate with each other. In fact, just a single one-minute phone call takes up the same bandwidth as 800 short SMS text messages.

“In today’s environment, where emergencies seem to be always around the corner, it’s critical for people to be prepared to stay in touch when phones lines are overtaxed. Texting is a good alternative to voice communications and is 800 times more likely to connect you. That’s why we’ve made it such an important part of our Foundation’s preparedness messaging,” commented Safe America President and CEO Len Pagano.

About the Safe America Foundation

The Safe America Foundation is a 501(c)(3) non-profit licensed by the state of Georgia. Chartered in 1994, the Marietta, Georgia based foundation partners with corporate, governmental, public and private sector organizations, and other nonprofits to improve the safety awareness and preparedness of Americans nationwide.