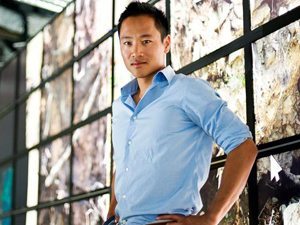 DESERT RESEARCH INSTITUTE NEWS RELEASE – In its 27-year history the Desert Research Institute’s Nevada Medal event has honored biologists, atmospheric chemists, ocean explorers and even a renowned paleoecologist – but never before someone as young and innovative as the 2014 medalist. In the spring of 2014, the Desert Research Institute will proudly present Dr. Albert Yu-Min Lin with the DRI Nevada Medal during a special event planned in Reno.

Dr. Lin, whose Chinese name (Yu-Min) roughly translates to “Citizen of the Universe”, is a research scientist at the UC San Diego division of the California Institute for Telecommunications and Information Technology (Calit2) and an Emerging Explorer of the National Geographic Society in the field of technology-enabled exploration. As the creator and Principal Investigator of the Valley of the Khans Project, an international multidisciplinary effort to locate the tomb of Genghis Kahn, Dr. Lin has led multiple technology driven expeditions deep into the most remote parts of the world and developed innovative platforms for satellite, aerial and subsurface remote sensing in exploration.

His team’s pioneering work to create new methods for massive data analysis through innovative crowdsourcing techniques earned him the 2011 US Geospatial Intelligence Foundation Academic Achievement award and was featured in a one-hour National Geographic Documentary film, “the Forbidden Tomb of Genghis Khan,” also in 2011.

“To me the Nevada Medal comes with the heavy responsibility of honoring the spirit of human curiosity… the desire to seek the unknown, stand at its bank, and venture in,” said Lin, who holds a Ph. D. in Materials Science and Engineering.

The 27th Annual DRI Nevada Medal Event in Reno will include a formal dinner and award ceremony, scheduled for Tuesday, March 25, 2014 at the Peppermill Resort Spa Casino. The evening will feature a cocktail hour beginning at 6:00 p.m., with the main event at 7:00 p.m.

“Albert is a pioneer in a new era of digital exploration and science education through public engagement,” said DRI President, Dr. Stephen Wells. “His work has motivated participation from thousands of people in real-time, on-the-ground scientific discovery in ways we never imagined. I’m also very excited that we are honoring a material scientist and engineer this year.”

The DRI Nevada Medal is a national award given annually, since 1988, by the Desert Research Institute to recognize and stimulate outstanding scientific, engineering, and technical achievements. Nominations are solicited from universities, research organizations, corporations, and individuals nationwide.

The DRI Nevada Medal award includes an eight-ounce minted medallion of .999 pure Nevada silver and $20,000 lecture honorarium. The award is formally presented by the Governor of Nevada during dinner ceremonies in Reno and Las Vegas attended by Nevada’s business, educational and governmental leaders.

DRI, the nonprofit research campus of the Nevada System of Higher Education, strives to be the world leader in environmental sciences through the application of knowledge and technologies to improve people’s lives throughout Nevada and the world.