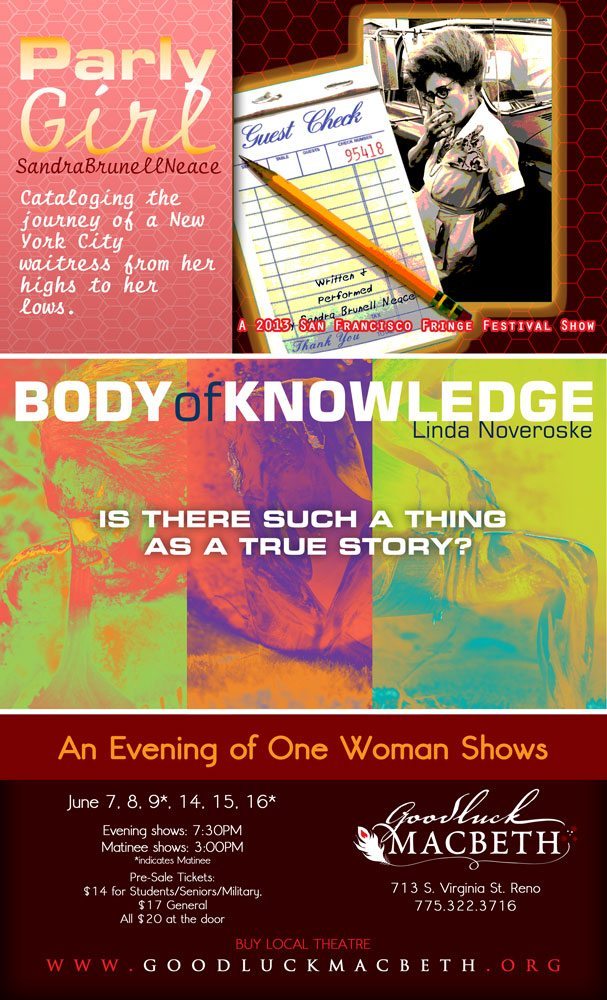 Parly Girl, a 2013 San Francisco Fringe Festival selected play, is a one woman show that catalogues the journey of a New York City waitress from her highs to her lows. The play weaves comedy into this real life tale while touching on the realities of making less than minimum wage in NYC. It is an exploration and journey of life’s tests and humanity – the ones we fail at and our greatest epiphanies.

Body of Knowledge, a non-traditional performance piece, is devoted to understanding how our histories—the stories that comprise both the past and the future—are embodied, represented, and performed. Is there such a thing as a “true” story? If so, can it be accessed? Does it inevitably transform over time and experience? This show is a series of performative anecdotes that we may use to explore the creation of collective memories through multiple forms of communication. And above all, it affords us the opportunity to see how these memories are inflected by shared laughter.

Presale tickets are $14 for students, seniors, and military, and $17 for the general public. All tickets are $20 at the door. To buy tickets or for more information visit Good Luck Macbeth online at www.goodluckmacbeth.org or call 775.322.3716.

Sandra Brunell Neace received a B.A. in Theater from The University of California at Riverside and an M.F.A. from The Actor’s Studio Drama School in New York. While in New York Sandra performed in Danny and the Deep Blue Sea at The Actors Studio. In 2004, she wrote and directed a short independent film titled “Magda”. The film premiered in Reno in 2004 and was recently screened in NYC in May 2012 as part of the Assdance Film Festival. Sandra is currently a part-time instructor at The University of Nevada Reno in the Theater Department and an artist in residence through Theatre Works of Northern Nevada. She has acted in many plays on both the East and West coasts and has directed theater at both Bruka Theatre and The Studio on 4th. In 2012, her adaptation of Euripides’ Medea, The Medea Project, had it’s East coast premiere at The New York International Fringe Festival. Her solo show, Parly Girl, will be performing at the San Francisco Fringe Festival this fall.

Linda Noveroske has been a professional actor, director, and playwright for over fifteen years, working predominantly in Reno, San Francisco, and London. She holds two masters degrees in Dramatic Art and Art History, and recently advanced to PhD Candidacy in Performance Studies at the University of California, Davis. She lives in Davis with her two amazing daughters, where she teaches for the Department of Theatre and Dance, and the Department of Art History, at UCD. She will next be performing “Body of Knowledge” at the Performance Studies International Conference at Stanford University (June 2013).