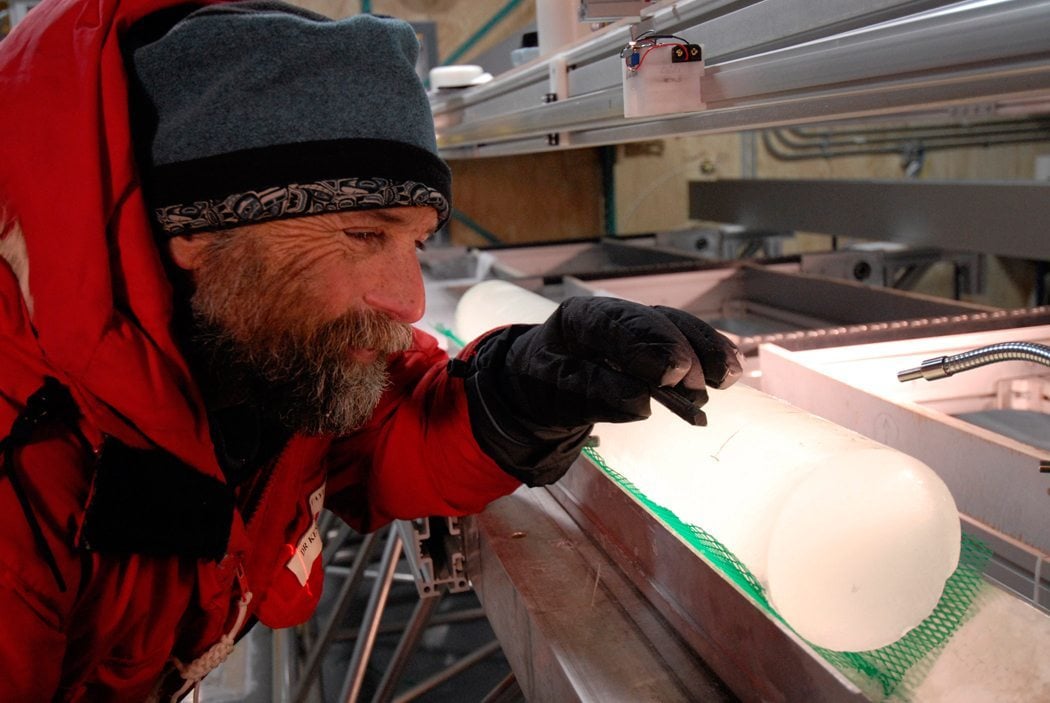 A team of U.S. ice-coring scientists and engineers in Antarctica, funded by the National Science Foundation and led by Dr. Kendrick Taylor, a research professor with the Division of Hydrologic Sciences at Nevada’s Desert Research Institute, have recovered from the ice sheet a record of past climate and greenhouse gases in the atmosphere that extends back 68,000 years.

Known as the West Antarctic Ice Sheet (WAIS) Divide ice core, the cylinders of ice that make up the core contain uniquely detailed information on past environmental conditions such as the atmospheric concentration of greenhouse gases, surface air temperature, wind patterns, the extent of sea ice around Antarctica, and the average temperature of the ocean.

Successfully retrieving the core is the culmination of an eight-year project to obtain a paleoclimate record from one of the remotest parts of the continent.

The ice containing the record was recovered at a field camp in the center of West Antarctica, 1,040 kilometers (650 miles) from the geographic South Pole, where the ice is more than 3,460 meters (two miles) thick. By allowing them to examine past climate at an annual resolution, the record will help scientists understand why climate can change abruptly, in less than 10 years, and how climate will unfold in the coming century.

Other ice coring projects have produced lower time-resolution records showing that the current level of greenhouse gases is the highest in at least 800,000 years due to the burning of fossil fuels. In the new WAIS Divide core each of the past 30,000 years of snowfall can be identified in individual layers of ice. The ice that is between 30,000 and 68,000 years old, while not containing records with annual resolution, still contains a higher time resolution record than previous projects.

When snow falls at WAIS Divide it rarely melts, and builds up in thick annual layers, which are compressed into ice by subsequent snowfall. Chemicals and gases in the atmosphere that are characteristic of environmental conditions when the snow fell are trapped in the ice. The age of the ice is determined by identifying the chemical difference between winter snow and summer snow, and counting the years much like counting tree rings to determine how old a tree is.

Samples of the ice core will be distributed to more than 20 U.S. university and national laboratories that make the measurements. Most of the measurements are indicative of global conditions, not just the remote location where the ice was collected. The information from the project will be used to test and improve the predictions of how the current human-caused increases in greenhouses gases like carbon dioxide and methane are altering the earth¹s climate.

“The combination of being able to identify individual years, and new analytical methods that were not available on previous projects, will greatly improve our understanding of how past changes in greenhouse gases influenced the global climate,” said Dr. Taylor, chief scientist for the WAIS Divide project.

Taylor added that it will take another two years to complete the analysis of the ice and publish the results.

WAIS Divide has taken eight field seasons to prepare the remote field camp and collect the core. The weather and the remoteness of the field site limit field operations to 60 days a year. The unique ice-coring drill was designed and operated by the Ice Drilling Design and Operations (IDDO) group at the University of Wisconsin, Madison, through a collaborative arrangement with the Ice Drilling Program Office.

In addition to collecting 3,405 meters (11,160 feet) ) of 12.2 centimeter (4.8 inch) diameter ice core, a new directional-drilling procedure was developed that allowed the team to drill through the wall of the main hole and collect a total of 285 meters (936 feet) of additional core from five of the most scientifically interesting time periods. This enables replication of the results and expands the suite of measurements that can be made on the most interesting ice.

This is the first time anyone has ever taken additional ice core out of the side of the borehole without blocking access to the lower part of the main borehole.

“It’s an engineering breakthrough, that will allow us to look in great detail at the causes of abrupt climate change,” said Jeff Severinghaus of Scripps Institution of Oceanography, chief scientist for replicate coring.

The team stopped drilling 165 feet (50 meters) above the contact between the ice and the rock to avoid contaminating the water at the bottom of the ice, which has been isolated from the rest of the biosphere for at least 100,000 years.

The National Science Foundation manages the U.S. Antarctic Program, through which it manages all U.S. research in Antarctica and in the Southern Ocean as well as all of the required logistical support.

The Whillans Ice Stream Subglacial Research Drilling project (WISSARD), working at a different site in West Antarctica and also funded by NSF, is using a different drilling method and a different engineering team to cleanly sample a sub-glacial lake to investigate the biology of the lake. The WISSARD team recently announced that it obtained samples of the lake bottom.

The official National Science Foundation release can be found at the link below:

More information on the project can be found at the following websites: