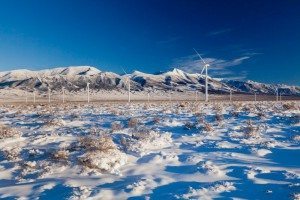 Pattern Energy Group LP (Pattern) recently announced that its Spring Valley Wind facility in Ely, Nevada has been awarded the Wind Project of the Year Award by POWER-GEN International. The award was announced Monday night at POWER-GEN International’s Projects of the Year awards gala in Orlando. The 151.8 MW Spring Valley Wind Project is the first wind project on public land, as well as the first wind project in the state of Nevada.

“We are honored that Spring Valley has received the prestigious Wind Project of the Year Award; this project was a tremendous collaboration that would not have been possible without the help of so many in Nevada,” said Mike Garland, CEO of Pattern Energy. “Spring Valley received support from Senator Reid, Senator Heller, Secretary Salazar, and local government officials, as well as the great people of Ely. We collaborated on this project with White Pine County, the State of Nevada, Bureau of Land Management, NV Energy, and several Federal agencies and environmental groups, including the U.S. Fish and Wildlife Service, Nevada Department of Wildlife, local Native American tribes, and the Sierra Club.”

The Spring Valley Wind project utilizes 66 Siemens 2.3 MW wind turbines, which can bring clean and affordable power to more than 45,000 Nevada homes. Mortenson Construction was the prime construction contractor on the project. “We thank all of the local contractors that provided services to Pattern and the project,” said Garland.

“Pattern was proud to bring its environmental leadership to Spring Valley Wind with groundbreaking mitigation measures that minimize impacts on the environment, including the preservation of cultural resources, funding for sage grouse, curtailment standards, modified electrical lines to reduce risks to birds, and an advanced radar system designed to protect birds and bats,” added Garland. “The project also provided a strong economic boost to the region and significant benefits to the community and school system for decades to come.”

Spring Valley Wind created approximately 240 jobs during construction and 13 full-time permanent positions for ongoing operations and maintenance. More than 40 businesses throughout Nevada were involved during construction and nearly $10 million has been spent with those businesses on construction goods and services. Spring Valley Wind is expected to generate more than $20 million in tax revenue for White Pine County and the state of Nevada’s Renewable Energy Fund over the next 20 years. Pattern has a 20-year power purchase agreement with NV Energy for the sale of energy produced by the project.

Spring Valley Wind is Pattern’s fourth operating wind project in North America, which have a combined total of more than 670 MW of capacity. Pattern expects to bring a number of additional wind projects into construction and operation over the next 12 months across North America, Puerto Rico and Latin America.