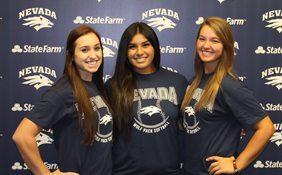 University of Nevada head softball coach Matt Meuchel announced the signing of three student-athletes to National Letters of Intent on Wednesday, the first day of the early signing period for 2013 commitments.

“We were able to address some immediate needs we have on offense, defense and in the circle with our 2013 recruiting class,” Meuchel said. “In addition, we were able to add two left-handed bats with proven power to our lineup and address our biggest departures on defense, all while bringing in another great arm to our pitching staff.”

Isenberg was a two-time all-region selection at Corona Del Sol High, earning four varsity letters for head coach Tom Maki. She was selected by her teammates as a captain in each of the last two seasons.

Orozco rounds out the 2013 class as the third member to be a four-year letterwinner in high school, earning four varsity letters at Corona Santiago High School. Improving her batting average in each of the last three seasons, she hit .375 in 2010, .390 in 2011 and .420 in 2012. Orozco led her 2011 Corona team to a 1A California State finals appearance.