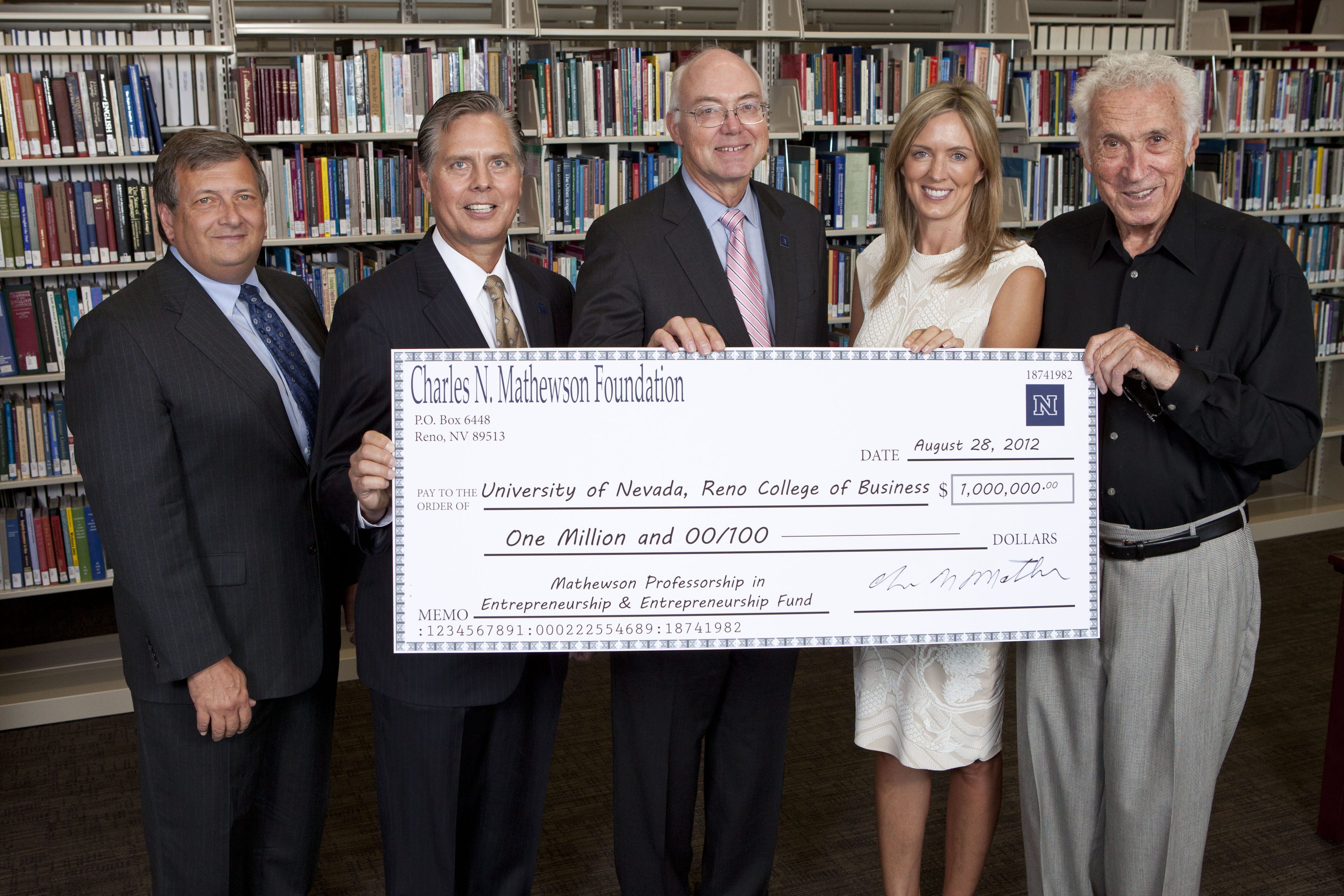 Although it was hot and sunny as students returned to campus at the University of Nevada, Reno this week, it felt a bit like Christmas, thanks to the generosity of philanthropist Charles N. Mathewson. This week, Mathewson presented a $1 million check to the University of Nevada, Reno Foundation to establish the Charles N. Mathewson Endowed Professorship in Entrepreneurship and lend additional support to expand the Entrepreneurship Program in the University’s College of Business.

“I’m a born entrepreneur,” Mathewson, investor and chairman emeritus of International Game Technology, said. “I respect that flare and try to encourage it in others because that’s part of what has made America great.”

Mathewson said he has been an entrepreneur his whole life, failing at his first few attempts.

“If you make a mistake and fail, that’s okay, so long as you don’t make the same one twice,” he said. “I’m just an entrepreneur at heart.”

Mathewson, his wife Stacie and their foundation, the Charles N. Mathewson Foundation, have been longtime supporters of the University. They contributed to the Philip G. Satre Chair in Gaming Studies in the College of Business in 2004, and in 2003, they donated $5 million for the construction of the Mathewson-IGT Knowledge Center on campus, one of the most technologically advanced libraries in the country.

They continued to support the Knowledge Center with a $500,000 gift in 2008, and have also supported the University’s Davidson Mathematics and Science Center, the Division of Health Sciences and Intercollegiate Athletics.

“I love the University,” Mathewson said. “And, it has an ideal setting to make Reno become a wonderful University town. Entrepreneurial efforts can absolutely play a role in that. I have a lot of interest in the University and want to participate in boosting northern Nevada as a whole. This gift will help prepare students for success in entrepreneurial ventures, which will positively impact Nevada’s economy.”

“The University has the ability to enhance economic development in a variety of ways, and promoting entrepreneurial efforts is just one way we aim to do that,” said Greg Mosier, dean of the University’s College of Business. “We are very grateful for Mr. Mathewson’s contributions and will immediately put them to good use to continue to grow our Entrepreneurship Program and give our students the tools they need to turn their business dreams into real-world success here in Nevada.”