By Sean Whaley, Nevada News Bureau: There are a few withdrawals in vacation destinations like New Orleans and Hawaii. There are a few from such tourist locations as Angel Stadium in Anaheim, SeaWorld San Diego and Pier 39 in San Francisco.

But a review of more than 65,000-plus debit card withdrawals by recipients of Nevada’s Temporary Assistance for Needy Families (TANF) cash grant program show the vast majority were made in Nevada at banks, ATMs, gas stations and grocery stores.

The records, provided by the state Division of Welfare and Supportive Services as a result of a public records request by the Nevada News Bureau, show withdrawal activity from June through December of 2011.

Some of the withdrawals with which taxpayers might take issue include a dozen transactions in Hawaii. The Hawaii withdrawals were made primarily in the Honolulu area, at the airport, a car rental firm and banks, although three transactions occurred on the Big Island.

The withdrawals at amusement parks and tourist destinations ranged from $20 at Knott’s Berry Farm in Southern California to a high of $440 at one of the Honolulu locations. 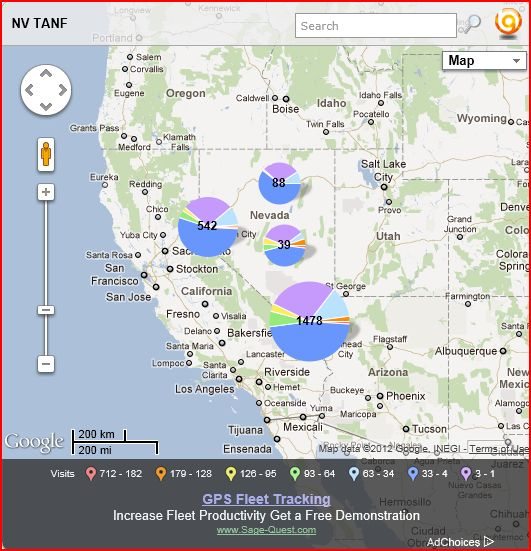 Miki Allard, staff specialist with the state welfare division, said Nevada taxpayers should take comfort in knowing that the vast majority of withdrawals through the TANF program appear to conform to the purpose of the program.

“My sense is that benefits are being used for their intended purpose,” she said. “There is no definitive answer because they can go to a bank, get the money and go do whatever they want with it. But I don’t see that our tracking shows any type of pattern of abuse.

“My analysis is that taxpayers should feel that the body of evidence shows that our benefits are being paid exactly, and used exactly for what they are being paid for,” Allard said.

The Nevada News Bureau decided to review the TANF withdrawals after the Los Angeles Times reviewed records in California and found more than $69 million in TANF funds, intended to help the needy pay their rent and clothe their children, that had been spent or withdrawn outside the state, including millions in Las Vegas, hundreds of thousands in Hawaii and thousands on cruise ships sailing from Miami.

The story, published in October 2010, found $11.8 million withdrawn in Las Vegas from January 2007 through May 2010, the implication being the money was used for gambling or other entertainment purposes.

NNB’s review of Nevada’s records found money withdrawn in states from Arkansas to Wyoming, and Washington, DC as well as a small number in Guam. The Guam withdrawals were made on Marine Corps Drive, suggesting they may have been made by a military family.

About 2.4 percent of the 65,536 transactions reviewed were out-of-state. No evidence of withdrawals from cruise ships or 4-star hotels were identified, except for one withdrawal at a Washington, DC Marriott hotel.

There are no restrictions currently on where recipients can withdraw cash once they are found to be eligible for assistance. The one exception is the cards cannot be used outside of the U.S.

And the withdrawals don’t indicate for certain what products were purchased, for example whether liquor was purchased at a liquor store or whether a withdrawal at a casino means the recipient was gambling.

Some restrictions on use of TANF debit cards are coming

Congress just earlier this year imposed some limitations on where TANF funds can be withdrawn, including casinos, liquor stores and adult entertainment venues. The limitations were put in the recently approved payroll tax cut bill and require states to implement a plan to prevent benefits from being accessed in these locations within the next two years.

Nevada’s TANF benefits are not overly generous compared to many other states.

The cash grant for an eligible family of three in Nevada is $383 a month with reductions for reportable income. The amount increases with the size of the family, reaching $708 with for a family of eight with no reportable income. Families up to 130 percent of the federal poverty rate are eligible for the assistance, with some adjustments for income.

Nevada’s TANF program budget for the current fiscal year totals just under $79 million, with nearly $26 million in stand funds and $53 million in federal dollars. There were 30,100 beneficiaries as of January 2012.

Pete Sepp, executive vice president of the National Taxpayers Union, said the rate of questionable payments identified in the NNB review suggests that oversight efforts have been paying off in the form of fewer wasted resources, although constant revisions to the process are always necessary to keep the program one step ahead of benefit abuse.

“However, I’d also point out that it’s still difficult to gauge the government’s official ‘improper payment’ rate in TANF,” he said. “This is a somewhat broader definition that might include not only payments for questionable items or activities, but also payments to those who didn’t qualify or overpayments based on mistakes made in applications.”

Sepp cited a 2012 Government Accountability Office report on improper payments, which said the U.S. Department of Health and Human Services has been unable to require states to participate in developing an improper payment estimate for the TANF program due to statutory limitations.

Nevada lawmakers say with some exceptions, program appears to be working as intended

Former state Sen. Sheila Leslie, D-Reno, who resigned to run for a new Senate seat, said: “I’d say while there are a few isolated questionable withdrawals, it is very reassuring to know that the vast majority of TANF recipients seem to be utilizing the program for its intended purpose.”

Even some transactions that might appear questionable could have reasonable explanations, she said.

“As I recall, we’ve only increased the monthly allotment once since the early 90s, and certainly inflation has eaten that up many times over,” she said.

Assemblyman John Hambrick, R-Las Vegas, said the public has every right to review the data and ask questions about the use of the cards in other states and for possible inappropriate purchases here in Nevada.

Hambrick said he has particular concerns about the use of the cards in liquor stores, since it is likely that at least in some cases, benefit recipients are purchasing alcohol.

Hambrick questioned if the agency could set up a system whereby staff would get an alert if a card was used in what he called “an exception to the rule” type place such as a casino or out-of-state use.

“What I would call an exception report,” he said. “We’ve got Smith, who just rented a car in Hawaii, and they’d do some more research; oh that’s fine. Technology should allow them to pop those unique places up and at least have a quick review.”

Allard said casinos are often used for withdrawals in Nevada because they are convenient, especially for those without transportation or who live in rural areas of the state and where local casinos are an economic lifeline.

There are also no prohibitions on a recipient taking a child to a baseball game or amusement park, she said.

Out of state usage not a violation in and of itself

Allard said there are situations where a recipient in Nevada is required to travel out-of-state, to care for an elderly parent or as part of a job search with the state’s highest-in-the-nation jobless rate.

Allard said the withdrawals are reviewed manually to check to see if someone is receiving benefits in two states, or if there is an out-of-state income source, and for other reasons.

“The LA Times article suggested that people were living on the dole and living big and traveling all over the country and using their benefits to fund expensive vacations,” she said. “If that was your game, if you were gaming the system, mostly likely you wouldn’t come to Nevada to do it, you would go to California because their benefits are almost twice as high.”

Allard said the coming prohibitions imposed by Congress may cause hardships for some Nevada recipients. People who live in Jackpot, for example, don’t have a bank nearby and rely on the local casino, she said. Benefit recipients also aren’t always very mobile, so a mother with an infant might use an ATM at a liquor store close by rather than walk a mile to a bank, she said.

“And a lot of our clients are disabled,” Allard said. “So they are able maybe to get in their power wheelchair and go to the closest ATM available, and now they are going to find that closest ATM doesn’t work for them.”

Miki Allard, staff specialist with the state welfare division, says the vast majority of withdrawals through the TANF program appear to conform to the purpose of the program:

Allard says Nevada’s benefits are low compared to California and so there is no incentive to “game” the system:

Allard says a lot of Nevada’s TANF clients are disabled and can’t travel far to use the cards:

Allard says taxpayers should feel confident the benefits are being used properly:

Assemblyman John Hambrick says the use of the cards in liquor stores is a concern:

Hambrick says out of the ordinary transactions should be reviewed: