Home > Entertainment > Books > BOOK REVIEW: ‘With Malice Toward One: A True Story of Prostitution, Politics and a Pulitzer Prize in Nevada’ by Clyde Biglieri
BooksBusinessEntertainmentGovernmentNewsPolitics

BOOK REVIEW: ‘With Malice Toward One: A True Story of Prostitution, Politics and a Pulitzer Prize in Nevada’ by Clyde Biglieri 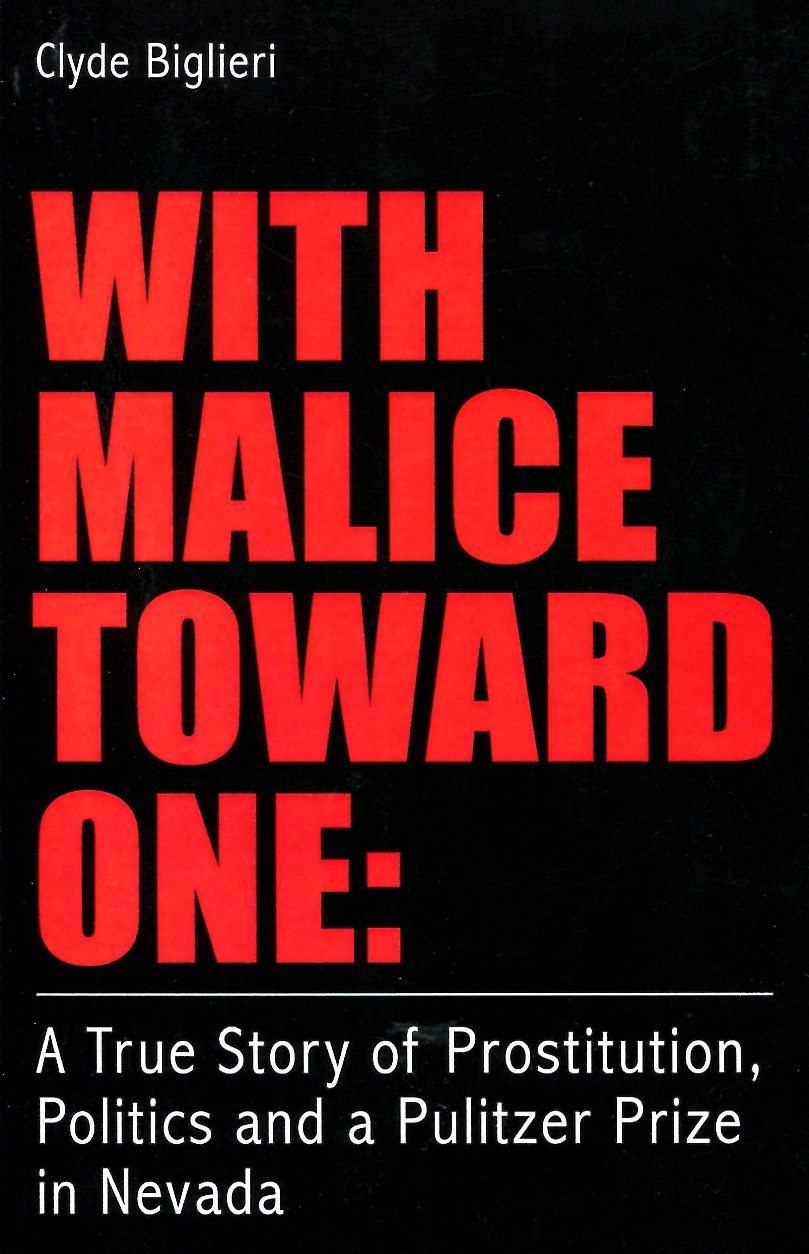 Clyde Biglieri believes articles and editorials published by the Reno papers in the 1970s were written “with malice toward one”—himself. After trying other methods of clearing his name with little success, he wrote and self-published this book in 2008. He says it maps out “the terrain of a life interrupted by a story, sacrificed for Pulitzers.”

Biglieri was a Reno city councilman and owner of Washoe Realty in the 1970s. His life changed in March 1976 when the Washoe County Grand Jury issued a report about organized crime. Most of the report was about the activities of Mustang Ranch owner Joe Conforte, the Sparks and Reno city councils, the Washoe County Commission, the Reno-Sparks Convention Authority, a Sparks municipal judge and a former state senator. A small portion of the report was about Biglieri.

The grand jury accused Biglieri of conflict of interest because a salesman in his real estate firm had handled a transaction in which Conforte bought land in Sparks from the Capurro family in 1973. More than a year later, Councilman Biglieri had voted in favor of increasing the hotel room tax to raise money for the Reno-Sparks Convention Authority to buy the land in Sparks from Conforte and build Wildcreek Golf Course on it.

Ever since the grand jury report was issued, Biglieri has been trying to restore his reputation.

Prostitution and politics
Conforte’s Mustang Ranch was in Storey County, where prostitution is legal. But it was right on the Washoe County line and close to Reno and Sparks. Conforte was active in the Reno-Sparks business community and local politics in the 1970s.

At the same time, Biglieri writes, “the Washoe County District Attorney’s Office, the Nevada State Journal and the Reno Evening Gazette, and the Organized Crime Unit . . . were working together, trying to bring Conforte down.”

The grand jury began its investigation about July 1974. It began with the Capurro-Conforte land transaction but spread into the local governmental bodies.

When the grand jury report was issued, Biglieri had already requested and received an advisory opinion from the Nevada Ethics Commission that there was no conflict of interest in his city council vote. He sent a copy of the opinion to the grand jury along with a letter requesting additional corrections be made. For example, the grand jury said Conforte paid a large commission to him on the land transaction. The sellers, the Capurro-Gault family, actually paid the commission (as is customary). The grand jury did not respond.

A Pulitzer Prize
The Reno papers (the Nevada State Journal and Reno Evening Gazette before they merged into the Reno Gazette-Journal) published the full report the day after the grand jury issued it. Biglieri sent his letter to them, too, and asked them to print retractions and issue a public apology. They did not do either, although they did publish his letter.

The Reno papers published more than 200 articles and editorials about the report. Many of them repeated the accusations about Biglieri and urged him along with other politicians named in the report to resign.

“Overnight my image changed from honorable, hard-working, respected City Councilman to criminal without my ever being indicted,” Biglieri writes.

In 1977, Warren Lerude, Norman Cardoza and Foster Church of the Reno papers received the Pulitzer Prize for editorial writing for the series of articles and editorials.

Aftermath
Biglieri continued to try to set the record straight, contacting the National News Council and the Columbia Journalism School, the authority for the Pulitzer Prize. Neither agreed to his requests to investigate the articles about him.

“The Pulitzer Prize is awarded for achievement in journalism,” Biglieri says. “Three editorial writers from two Nevada papers were awarded the prize even with the faulty reporting and outright malice.”

Biglieri repeatedly tried to see the records of a Nevada Real Estate Division investigation of the Conforte transaction that had begun a few months before the grand jury inquiry. In 1979 he finally initiated a court action to see the file, and a few days before the trial date the records for his case were burned in a mysterious fire that burned little besides the file he was trying to see.

He lost his city council re-election campaign in 1979, which he blames on the bad publicity. He also lost his business, and he attributes his wife’s lengthy illness and death in 2001 to the stress from the accusations.

“There was nothing illegal about the transaction,” Biglieri writes. “But my name was still dragged all the way through the Pulitzer-winning editorials—even after the Nevada Supreme Court ordered my name expunged from the report. . . . Even after the newspapers were given files showing my innocence, the editorials continued to include me. . . . The publishers weren’t after me. But neither was there any evidence that they cared if I was caught up in the intrigue they had created.”

This well-written and well-edited book is a quick read. In fact, the text fills less than 30 of its 170 pages. The rest of it includes the full grand jury report, meeting minutes, correspondence and more. As a long-time Reno resident who remembers many of the names mentioned, I enjoyed browsing through the documentation and seeing behind the scenes of Washoe County’s recent political history.

OPINION: Wildcreek Golf Course and the winds of change