By Bob Conrad October 12, 2018
The Save Wildcreek group is opposed to using the Wildcreek Golf Course for a public high school. Image: Bob Conrad. 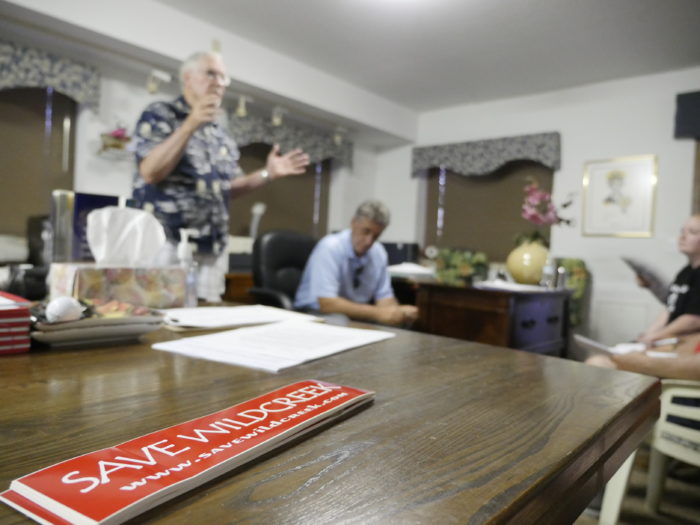 Motions to dismiss a lawsuit against the construction and location of Wildcreek High School have been granted by the Second Judicial Court of Washoe County. The Save Wildcreek group of citizens are opposed to the high school and sued to stop it.

Wildcreek homeowners said that transferring the property to the school district for a school was illegal.

Attorney Steven Bus, who was voluntarily representing the Wildcreek Homeowners Association to prevent the high school from being built at the golf course, said: “It is as clear as reflected in the statutes that the Nevada Legislature did not intend a public high school to qualify as a recreational facility.”

An order by Judge David Hardy, however, granted the district’s, Washoe County’s and RSCVA’s motions to dismiss the suit.

“We are pleased to see this lawsuit dismissed. We believed it had no merit from the beginning, and are glad to see the judge agreed with our position,” said the school district’s attorney, Neil Rombardo.

Wes Griffin with Save Wildcreek said the group has not considered its options at this point but indicated that an appeal could be considered.

A vote to move a utility line across the Wildcreek property was denied yesterday by the governing board of the Truckee Meadows Regional Planning Agency. The school district approached NV Energy to move the utility corridor for Wildcreek High School, but the district does not yet own the land.

Some on on the board said not enough work has been done by the school district to move the utility corridor.

The vote by the regional planning board was a bipartisan split with five for and four against the moving the power line, but it didn’t pass because it required a majority of six votes out of the 10 members.

“This is not a solid ‘no’ vote; this is a request for the school district to bring forward a more complete package,” said board member and county commissioner Vaughn Hartung, who voted against the move.

Hartung said he was concerned about the traffic in the area: “There’s expectations by the community as whole to build schools — we get that — but we’re asking how the district will mitigate the project from its current status as a low-impact property to becoming a high-impact property.”

“There’s no plan out there by the school district as to how they’re going to address traffic, storm water, and any other these things that we need to make changes to the regional plan,” he said. “They have to be presented and must fit the requirements. (The school district’s) trying to say that moving the power line was just moving the line and it didn’t have to do with anything else. We know that’s not true.”

“I’d be happy to reconsider if they can present to the board the findings that need to be met,” McKenzie added.