By Sean Whaley, Nevada News Bureau: More than 2,300 Nevada nonprofit groups have had their tax exempt status revoked by the Internal Revenue Service.

The revocations run the gamut, from the Edgewood Tahoe Mens Club to the Lovelock Alfalfa Seed Growers. Most of the revocations occurred in 2010 but were just posted by the agency last year.

The IRS in June of 2o11 released a list of more than 275,000 nonprofits nationwide that had their tax-exempt status automatically revoked due to failure to file annual returns.

The revocations mean that the nonprofits are no longer exempt from federal income tax, and will have to pay corporate income tax on annual revenue. Organizations may also be subject to back taxes for failure to pay from the date of revocation. It also means donors will not be able to receive tax deductions for their gifts to the groups after the revocation date. 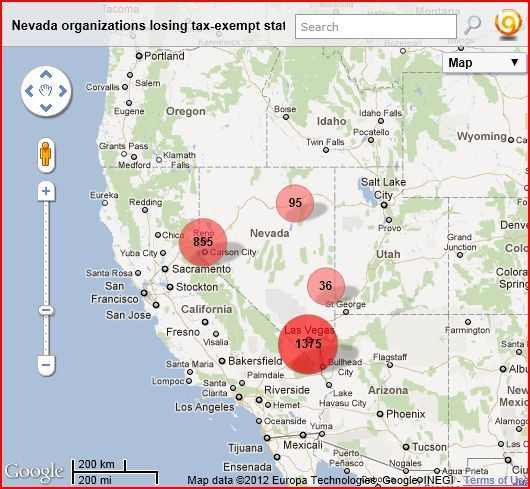 The revocations were an automatic action taken after the passing of a pension reform act in 2006. Nonprofit organizations are required to file paperwork with the IRS each year under the requirements of the law, and those that do not file anything for three consecutive years get their status revoked.

Many of the organizations are believed to no longer exist but others were caught by surprise.

Phil Johncock, interim executive director of the Alliance for Nevada Nonprofits (ANN), said many of the groups listed are likely no longer in operation. The group also made a big push in 2010 to notify the operating nonprofits of the new rules, particularly in the arts arena, he said.

But the contact information for the groups is limited, and so there may still be a number of nonprofits that remain unaware of the new requirements, Johncock said.

“You would think we would have access to emails for all of these nonprofits but the IRS only provides us with names and addresses, so some we couldn’t reach,” he said. “We have not heard from any of those organizations that have lost their status. Our guess is a significant number of them are probably not in business now.”

ANN has information on how to restore nonprofit status.

One group taken by surprise was the C-Hill Foundation, a group formed in Carson City after the 2001 terrorist attacks to install a large U.S. flag on “C” hill in the capital.

The IRS reports that it revoked the nonprofit status of the group in May 2010, and posted the information in June of 2011. The group is registered with the Nevada Secretary of State’s Office as a domestic nonprofit.

Sarah Buscay, secretary of the foundation, said she was not aware of the revocation. The group isn’t overly active right now, but that could change if a plan under discussion to illuminate the flag moves forward.

“I did not know about that,” she said. “I’m sure I would have heard something if anybody knew about it.”

Buscay said the group would have been in a tough situation if it had gone forward with a fund-raising event without knowing of the revocation.

“We will definitely need that status,” she said.

Johncock said it is surprising to him that his organization has not been contacted by more groups, given the number of nonprofits that have lost their status. Most of the nonprofits on the list are 501(c)(3) groups, which are charitable organizations that can receive donations, he said.

Moving forward there could be more nonprofits that lose their status because of the reporting requirements, he said. ANN is offering to help nonprofits fill out the required form at no cost, Johncock said.

“We hope that we’re not in a position ever again to lose nonprofits, or that they would lose their status, because it’s expensive,” he said. “It can be quite pricey.”

It cost ANN $750 to file its application, Johncock said.

Phil Johncock, interim executive director of the Alliance for Nevada Nonprofits says the agency could not reach all the nonprofits about the new rules:

Johncock says a lot of the groups are probably no longer active:

Johncock says he hopes the majority of nonprofit revocations are now in the past: