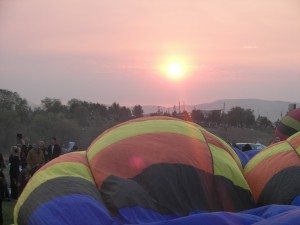 The Great Reno Balloon Race Board of Trustees, together with Officials from the State of Nevada, the cities of Reno and Sparks, and Washoe County, invite northern Nevadans to honor the heroes and remember the lives lost on this tenth anniversary of the Sept. 11, 2001 terrorist attacks. The commemoration will take place on Sunday, Sept. 11, 2011, the last day of the Great Reno Balloon Race.

“The 9/11 anniversary often falls during the Balloon Race and we are honored to host this day of remembrance for our community,” Pilar Aldecoaotalora, President of the Balloon Race Board of Trustees said.

The official ceremony, which will take place at 6:30 a.m. before Mass Ascension, is scheduled to commence with a brief address from Nevada Gov. Brian Sandoval. An Honor Guard, represented by all local agencies, will present the colors, followed by KTVN News Channel 2’s Mike Alger, who will sing the National Anthem. During Mass Ascension, all balloons will carry an American flag, to decorate the sky in remembrance. Mayors Bob Cashell and Geno Martini, and Washoe County Commissioner and Chairman John Breternitz will also be in attendance, as well as uniformed police and fire from both cities and the Washoe County Sherriff’s Office.

“I personally invite residents of the Truckee Meadows to join in the commemorative event to honor all of the victims who lost their lives during the 9/11 terrorist attack on this 10-year anniversary,” Mayor Cashell said. “Join your fellow citizens to show your love for our country and patriotism as we continue support the brave men and women of our country who serve and fight around the world to defend our homes against terrorism and ensure our freedom.”

For early risers, the music tribute will begin at 5 a.m. with accompanying patriotic music and commentary during the Glow Show and Dawn Patrol. Spectators are encouraged to arrive early and secure parking at www.renoballoon.com.

“We all remember where we were, and what we were doing ten years ago on Sept. 11,” Mayor Martini said. “That day changed the course of history as a nation, and changed many of our lives forever.  On Sunday morning (9/11/11), at the Great Reno Balloon Race, we invite all the residents of Sparks, Reno and throughout the region in remembering and honoring the lives that were lost and the lives shattered as a result of the tragic events of 9/11.”

“As we gather to commemorate those horrific events that occurred on Sept. 11 ten years ago, it’s my hope that we also remember how far this country has come since that time,” Commissioner Breternitz stated.  “Those in public service, especially first responders like firefighters and law enforcement, are committed now more than ever to meet the emergency needs of our citizens.  Citizens are more aware too of the important role they play in working with those in public service to help protect their communities and, ultimately, their country.  Our gathering on Sept. 11 this year will be a time to remember but also a time to look forward as a community and as a country.”

The Great Reno Balloon Race is a nonprofit event provided to the community at no cost. The event celebrates its 30th anniversary Sept. 9 – 11, 2011. For more information, please visit www.renoballoon.com.