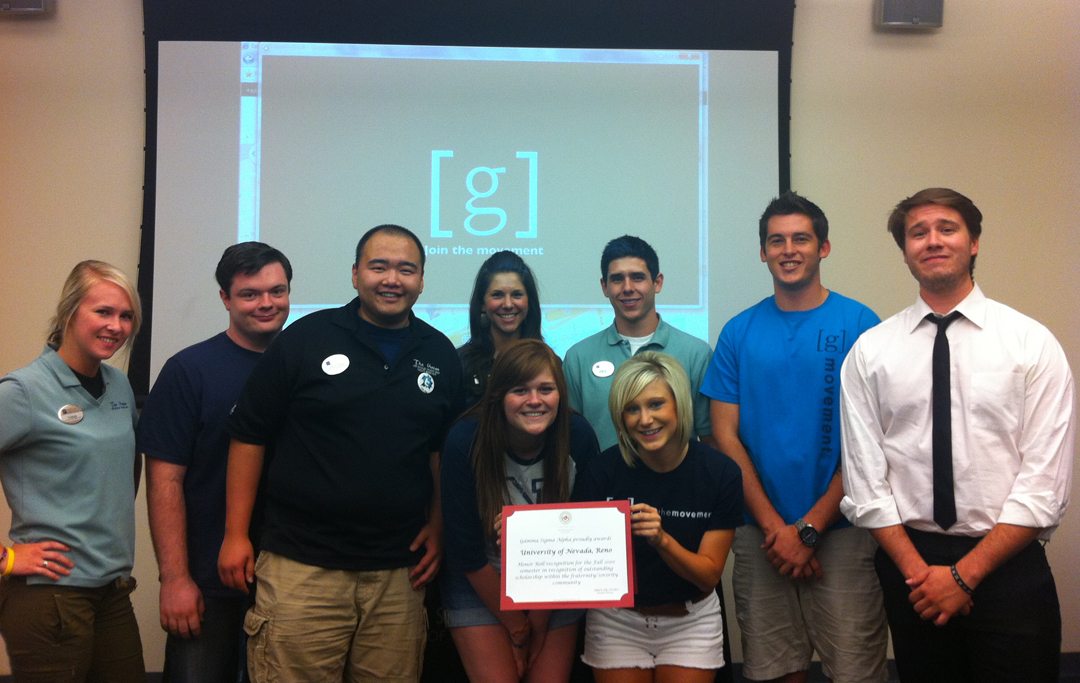 The University of Nevada, Reno’s Gamma Sigma Alpha (GSA) community, a collective of junior and senior members of the National Greek Academic Honor Society, was recognized for the first time on the GSA’s National Honor Roll in June. The University is one of 38 institutions announced on the honor roll based on its members’ achievements in the fall of 2010.

“This award means a lot for our fraternity and sorority community,” said Jeanine Menolascino, chapter advisor for GSA. “First and foremost, it means that they are upholding one of their core values of scholarship. As a community we strive to provide our members with support and an atmosphere that fosters academic success and individual scholarship.”

The Honor Roll is announced every spring at the Association of Fraternal Leadership and Values regional conferences. It represents the top 5 percent of academic performing fraternity and sorority communities in North America. In order to receive the award, the fraternity and sorority community at the University had a semester grade-point average that was higher than the semester grade-point average of all the undergraduates at the University.

“In achieving a GPA that is higher than that of the all-undergraduate GPA, we are able to justifiably say that our organizations are successfully achieving this goal through their scholarship and academic success plans,” Menolascino said. “It also provides our community with national recognition. Although it will not be announced until next April, based on our spring 2011 GPA, we will also receive it for a second semester in a row.”

Gamma Sigma Alpha is a fraternal honors society for junior and senior members of any Greek lettered organization. Their mission is to recognize and advance academic excellence as a core value of fraternities and sororities.

“The students are very pleased with their achievements,” Menolascino said. “They are excited to have gained national recognition for the campus and their community. For all our students, raising their chapter, council and community GPAs were a primary goal for the last year, and it is very rewarding for them to see their hard work and dedication come to fruition. It has also meant that they are going to assess the new things they tried that are working and continue with those initiatives and also create different initiatives to help them reach their new goals,  including achieving an even higher GPA.”

The Delta Iota Chapter of Gamma Sigma Alpha National Greek Academic Honor Society was established at the University on March 1, 1997. Since its chartering on campus, the chapter has invited and tapped more than 500 fraternity and sorority men and women.

For more information about the Gamma Sigma Alpha Honor Roll, go to http://gammasigmaalpha.org/resources/honor-roll/.