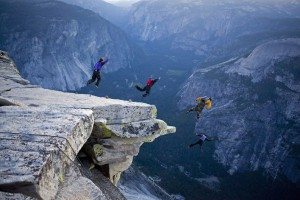 Incline Village, NV  – A Sierra Nevada College student (who shall remain unnamed, pictured in yellow*) is featured in a spectacular photo in the May 2011 National Geographic photo spread as part of the cover article “Above Yosemite”  along with other gifted athletes.  The photo by Lynsey Dyer ([email protected]) is the final photo spread for the article featuring the history and future of climbing in the Park. The photo has been featured on Microsoft Search Engine “Bing” home screen, was a National Geographic Photo of the Month, and is in the current May 2011 issue. The photo is currently under contract with National Geographic, but will be available for magazine and newspaper use after September 1, 2011.  Please send any usage requests or inquiries to Eric Rohr at www.jimmychin.com or call 307-699-0317.

Many students come to Sierra Nevada College to join their love for the outdoors and mountain sports with an excellent environmentally focused Liberal Arts education. Sierra Nevada College offers Outdoor Adventure Programs, including rock climbing, for all students and a very unique Interdisciplinary Blended Major combining Outdoor Leadership (ODAL) with one of six liberal arts disciplines. ODAL students combine advanced outdoor skills, experiential leadership styles, risk management, national certifications, and wilderness ethics with more traditional studies. Students can often be seen practicing slacklining on the green grass of campus following a Journalism or Resort Management Class, to name a few. And while students may participate in more extreme sports, like BASE Jumping, SNC does not endorse, encourage or facilitate these activities as part of the curriculum.

*BASE jumping, also B.A.S.E jumping, is an activity that employs an initially packed parachute to jump from fixed objects. “B.A.S.E.” is an acronym that stands for four categories of fixed objects from which one can jump: buildings, antennae, spans (bridges), and earth (cliffs). The National Park Service has banned BASE jumping in US National Parks and climbers argue BASE should be legal, particularly since rock climbing and slacklining are legal in Yosemite. In fact, some of the first BASE jumps were made in Yosemite. The Park Service argues the environmental impact created by BASE jumpers is detrimental. Advocates argue that BASE jumping is only one-half of a round-trip hike and utilizes the same materials as legal tent and pack climbers.

“Speed has become the creed of the new uber climbers,” NG author Mark Jenkins writes. With less gear and no ropes to cause delays, climbers can ascend rock faces with a speed never before imagined. Some climbers often take the faster thrill-seeking method for the descent. Jenkins’ piece is a fascinating peek into a world few know exist. “Leaping from Half Dome is illegal, but in Yosemite, the sport of BASE jumping is soaring in popularity anyway,” the photo caption reads.  For video : “Capturing Yosemite’s Superclimbers”  is available here http://video.nationalgeographic.com/video/player/the-magazine/the-magazine-latest/ngm-yosemite-jimmy-chin.html