By Sean Whaley, Nevada News Bureau: Gov. Brian Sandoval emerged from a meeting with Republican lawmakers today saying he is not willing to consider extending taxes set to sunset June 30 to provide more money for the two-year state budget.

Asked if there was a budget deal, Sandoval replied: “Not that I’m aware of.” 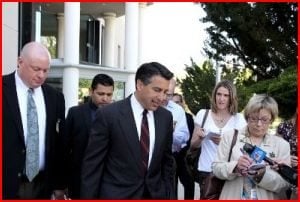 Sandoval said he has submitted a balanced budget and that extending expiring tax revenues is not an option he will accept.

Sandoval said he has discussed with Republicans the idea of using “triggers” whereby tax revenues that come in above projections could be used to increase funding to public education and other areas of the budget.

But Sandoval said he has not had talks with Democrats on the subject.

Democrats are still pushing for an extension of the expiring tax revenues to bring more revenue to the state spending plan submitted by Sandoval that totals $6.1 billion. If the taxes were extended, they would bring in about $626 million in additional revenue over the two years of the budget that will start July 1.

Democrats were also meeting behind closed doors ahead of a joint Senate Finance and Assembly Ways and Means committee meeting to “reconsider” the public education, higher education and health and human services budgets.

Democrats on the two panels have added $968 million more to these areas than existing revenues will cover. The meeting is expected to see Democrats cut those spending levels.

The budget has to be close to completion by Friday in order for the Legislature to finish its business by June 6. Sandoval has asked that lawmakers finish up by the constitutionally-mandated 120-day deadline. He has said he won’t call a special session right away if lawmakers don’t finish on time.