By Sean Whaley, Nevada News Bureau: After a lengthy hearing in the Assembly today on what several witnesses said were the catastrophic effects of Gov. Brian Sandoval’s budget recommendations for higher education, Republican members held firm with the executive branch in a series of funding votes.

The votes came in a meeting of the Committee of the Whole, where all 42 members of the Assembly heard testimony on what higher education officials and supporters said were reductions that would mean closing off access to higher education to as many as 19,000 Nevada high school graduates.

Dan Klaich, chancellor of the Nevada System of Higher Education, talked about the effects of Sandoval’s budget in hearings in both the Senate and Assembly.

Today he offered an alternative to the Sandoval budget that would increase student fees by 13 percent, require cuts in operating budgets of another 13 percent, and see $100 million in additional revenue from lawmakers. The final element of the plan would restore additional funding in the second year of the budget if the economy recovers and revenues come in higher than projections. 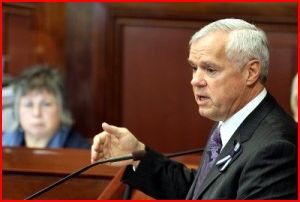 Sandoval’s budget would reduce state funding to the system by $162 million.

Heidi Gansert, chief of staff to Sandoval, and Andrew Clinger, the state budget director, defended the higher education budget and responded to questions at the hearings.

The administration’s position has been consistent: that the key to getting Nevada out of its economic downturn is to create more jobs, and that tax increases would slow any recovery.

The 16 Assembly Republicans held firm with Sandoval in the votes, which included questions about whether to support Sandoval’s proposed higher education budget. The Republican caucus picked up two Democrats in support when the vote was on the question of whether the Assembly should support tuition increases of 10 percent to 15 percent to offset some of the budget reductions to higher education in the Sandoval budget.

Democrats Harvey Munford and Marilyn Kirkpatrick, both from Southern Nevada, voted with Republicans on the tuition question.

Kirkpatrick, D-North Las Vegas, also said it seemed as though the Board of Regents would approve a tuition increase of somewhere between 10 to 15 percent anyway.

“I think we are going to end up raising tuition,” she said. “I just hope we can keep the same quality of education as we do that.”

The mostly party-line votes mirrored those in the Assembly on Tuesday, when the subject was the public education budget. The Senate budget hearings did not include votes by the 11 Democrats and 10 Republicans.

Democrats seeking to offset some of what they argue are the worst cuts in Sandoval’s budget need the support of a few Republicans to raise taxes or continue those tax increases approved by the 2009 Legislature that are set to expire on June 30.

Sandoval has been unwavering in his position that he will not raise taxes or fees as part of his two-year, $5.8 billion general fund budget. Democrats need three GOP supporters in the Senate and two in the Assembly to raise taxes and override a Sandoval veto.

In the Senate Committee of the Whole hearing, Sen. Michael Roberson, R-Las Vegas, asked Klaich about his alternative budget proposal: “For argument’s sake, if we need $100 million … where does that come from or where do we cut?”

Klaich replied that the Legislature could mitigate many of the worst cuts, including those proposed for higher education, if it considers extending the 2009 tax increase that is scheduled to end this July.

“We are talking about a budget that is built on giving a tax cut in the upcoming biennium to the largest businesses in the state by allowing the taxes to sunset,” he said.

The 2009 Legislature increased the business tax on the state’s largest employers as part of a tax package to help balance the current budget. Those increases were required to sunset, however, on June 30 of this year.

Sandoval has rejected any suggestion of extending the sunsets to add more revenue to his budget.

The Senate hearing also featured some of the state’s prominent businessmen speaking to the benefits of higher education. They said corporate philanthropy may be in danger if businesses cannot be assured the state views its universities and colleges as long-term, sustainable investments.

Representatives from businesses in the Las Vegas Chamber of Commerce echoed last week’s chamber memo, in which the chamber outlined a plan for reforms to the state’s higher education system paired with a possible tax increase.

Today, a representative from the Henderson Chamber of Commerce made a similar statement.

“Members are almost universally supportive of higher education,” said Kirk Claussen of Wells Fargo and the Henderson Chamber of Commerce. “…If they can be assured that the taxes they are already paying into the state are being effectively and efficiently spent, they are willing to come to the table to talk about additional taxes to help support the system.”

The votes suggest that bringing the 2011 legislative session to a close won’t be an easy task. If an acceptable budget is not in place by June 6, when the session must end, at least one and possibly more special sessions could be necessary, running the budget debate well into the summer.