Good Wool Hunting: raising a sheep in the middle of Reno

This is the first part in what will be a brief, but ongoing series of posts about living in a city and raising livestock.

Parents are faced with a lot of challenges. Most of them involve decisions that will seemingly affect a kid’s life forever at the expense of something in the short term. Many seem like a big deal and probably don’t ultimately mean a whole lot, but some probably mean a great deal. Such is the case with my daughter, Emma, right now.

I have no idea how she came to be this kid who belongs in a rural setting. But she kind of does belong there, it seems. As many, many children are apt to do, she took an interest in animals at a pretty early age. There were pictures of horses in her room, book about this animal or that, and all the usual stuff. What I guess was different is that we live in a place that offers quite a bit of opportunity for a kid like her.

At a birthday party (I’m thinking seven years old) we acted upon that love of animals for the first real time. We have this friend who has a few horses and had recently gotten into showing mini horses. Mini horses are just like regular horses but small. They’re only up to 36 inches tall and you compete with them by riding in a cart that they pull.

This friend’s daughter had begun to learn how to train them after growing up with regular horses her whole life. She was about 13 at the time and offered to bring a mini horse to the birthday party to give kids rides down our alley. They showed up in a double cab pickup truck with the cart in the bed of the truck and the horse staining in the back seat. It was quite a sight! The horse puled kids along and everyone had a grand time. Emma was hooked on the mini horses. 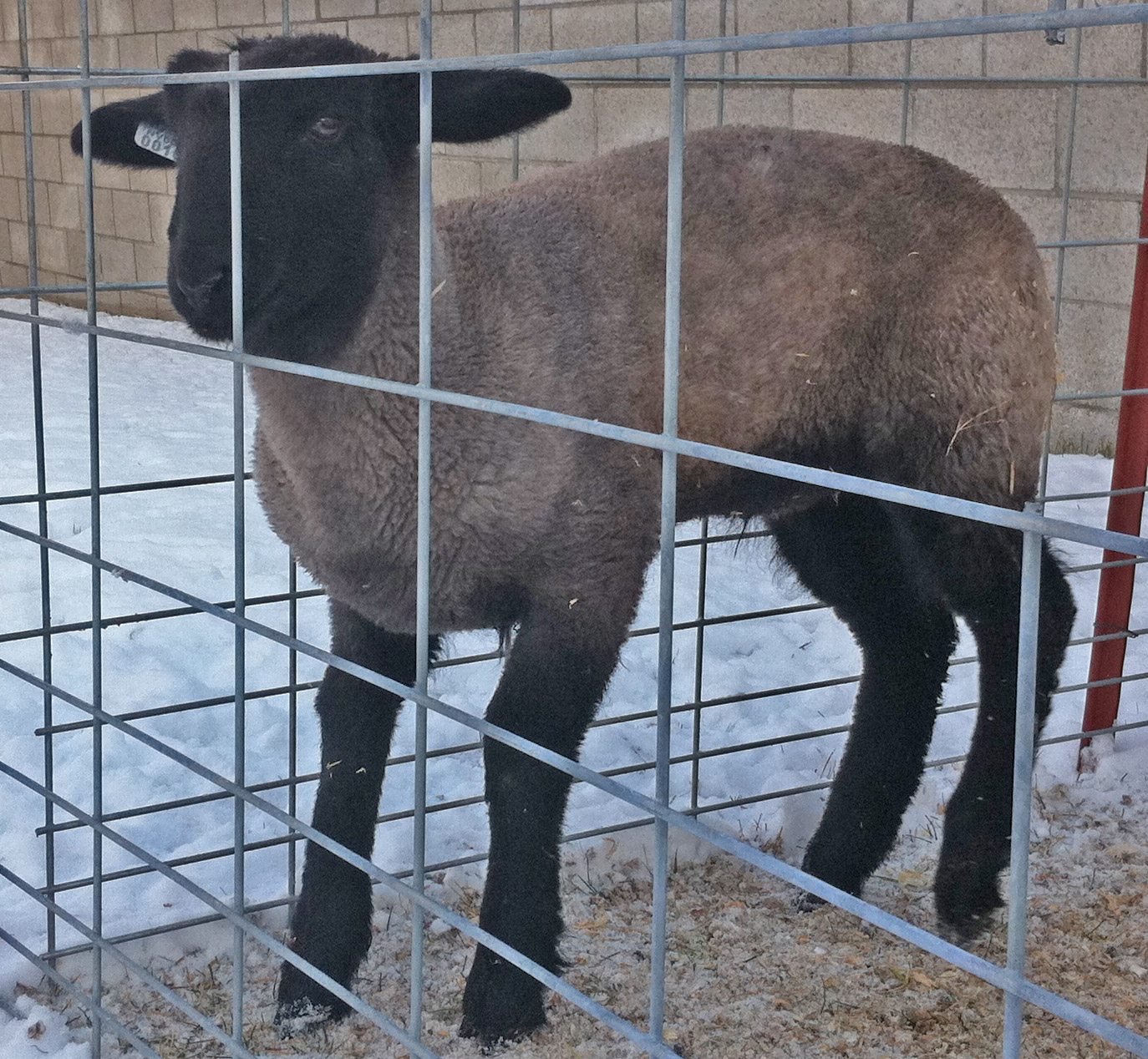 After a few years, she started to go to this same young lady to learn how to drive the horse carts. She competed shortly after that and has been continuing her training since then. Recently, talk began about raising an animal of her own. How do you even do that? We had no idea. My wife, Christy, being who she is started looking into it and came across 4-H. Of course. I had heard of 4-H but never really knew what they were about. As it turns out, around here they’re very much about raising animals on your own. Sheep, pigs, steers, rabbits, and several other possibilities are out there.

Emma deliberated for a bit and decided she really wanted to raise a sheep. We thought the idea was pretty much insane. I mean, it is right? Luckily, we had some resources. We started asking around about places the sheep could stay for the few months we’d have it and have to take care of it before it was sold. The perfect fit would be the place where she does the horse training. We’re already there several days each week and there is room. However, the lady who owns the place is against her animals being sent to slaughter, so she pretty much wouldn’t have it. As the parent, I somewhat welcomed this response. First, it’s her place and this is a real thing. Second, I was kind of against this whole idea and looking for an easy out. Please let this be that out. 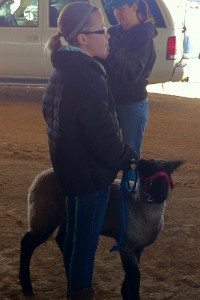 My daughter, Emma, and her sheep, Socks, wait in line at the Reno Livestock Events Center for a weigh-in on February 27, 2011. Photo by Ryan Jerz.

It wasn’t that out. “We could keep it at our house.” Those seven words made me laugh out loud. There was no way it would be staying at our house. We chose to live in town because we aren’t the type of people who keep animals at our house. Those are the decisions you make! Our neighbors would never agree to this! We’d be the weirdos with a freaking SHEEP in our yard!

The ball was rolling, though, and I wasn’t going to stop it. This was one of those decisions that you make for your kids that affects their lives forever, I suppose. Christy was telling me that this was a really interesting opportunity for Emma and something that could have a profound effect on her future. She, like many kids, has talked of being a vet or living on a ranch or whatever. All things that we tell our kids they can definitely do if they want to. But many kids with those interests don’t get the opportunity to see what that side of life is really like. So I sort of halfway agreed that we might be able to maybe pull this off, but I still maintained it was pretty weird. I mean, it is right?

Also, is it legal? After searching online we found this information (Reno Municipal code):

I’m, of course, not a lawyer, but it appears that those links tell me that a sheep is no different from a dog in Reno. It must not be a nuisance, it must be restrained when in public, and it is, indeed, a domestic animal. Another strike against my wanting this not to happen.

My biggest fear in beginning this was the obvious: the sheep would be a nuisance. I barely slept the first night because I was very worried about the possible noise. We heard it would be a few days before the sheep would adjust and until then it would probably be a little bit rough. We had asked the neighbors if they would object to us doing this and they told us it shouldn’t be an issue—nobody really even opens their windows until May or so anyway. We listened and heard the sheep periodically throughout that first night and it wasn’t super loud. Nevertheless, we sent Emma over to explain that it would be just a few days before the sheep quieted down. The neighbors told her they hadn’t even noticed, and all the nerves were calmed at our house.

The way the 4-H program works (and I am not an expert, just a really, really new parent to this ordeal) is that it’s there to teach kids the business of raising animals. The animals cost money to purchase. They cost money to feed and care for. Then they sell for money and get slaughtered for their meat. It’s American ranching on a micro scale. It’s where our food comes from, and the more I’ve learned about it, the more impressed I’ve become.

The sheep has been given the name Socks, and we’ve had him at our house for just over two weeks now. Each morning, Emma wakes up at 6:00 to go feed him and make sure he has unfrozen water to drink. Each afternoon, she exercises him in the yard for about 30-45 minutes. Each evening, she feeds him again, checks his water, then a few hours later (when it’s her bed time) she puts him back into his shelter and latches the door. We added a door to the shelter when the cold really got extreme over the last week. This cycle will continue until the local livestock sale in early May. We’ll have had the sheep a grand total of 71 days, I believe, which is pretty short considering. 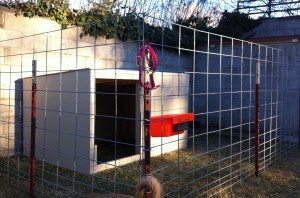 The pen and shelter that were built in our back yard. Photo by Ryan Jerz.

All of the supplies have been paid for by Emma’s savings. She’ll likely lose a little bit of money this year because she’s had to pay for one-time expenses like the pen being built in the yard along with the shelter, the feed bucket, water dish, etc. But all of that stays with us and if she decides to do this again it will be less costly and a potentially bigger money-maker for her.

We’ve heard stories of people our age who say 4-H paid for the college education. We harbor no delusions that this will do that for Emma, but we see it as something that will give her invaluable experience in a field that she seems to be intent on pursuing in her life. I see nothing wrong with that, even if we are the weirdos who have a sheep in their yard a few months each year.

Ryan Jerz is one of the founders of This Is Reno. He normally isn’t an animal-raising type, but he also feels like someone needs to show that Brooklyn isn’t the only place where interesting things can happen. Socks the sheep is for sale. Inquire within.

Buy a Vendor Booth at the 30th Anniversary Balloon Race