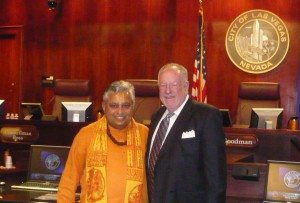 Hindu leader Rajan Zed, who is based in Reno, delivered invocation from Sanskrit scriptures before Las Vegas City Council today. After Sanskrit delivery, he then read the English translation of the prayer. Sanskrit is considered a sacred language in Hinduism and root language of Indo-European languages.

Zed, who is the president of Universal Society of Hinduism, recited from Rig-Veda, the oldest scripture of the world still in common use, besides lines from Upanishads and Bhagavad-Gita (Song of the Lord), both ancient Hindu scriptures. He started and ended the prayer with “Om”, the mystical syllable containing the universe, which in Hinduism is used to introduce and conclude religious work.

City Council members, City employees and public stood quietly in prayer mode with heads bowed down during the prayer. Wearing saffron colored attire, a ruddraksh mala (rosary), and traditional sandalpaste tilak (religious mark) on the forehead, Rajan Zed sprinkled few drops of sacred water from river Ganga in India around the podium before the prayer. He presented a copy of Bhagavad-Gita to Las Vegas Mayor Oscar B. Goodman and Las Vegas Fire Chief Mike Myers.

Reciting from Brahadaranyakopanishad, Zed said “Asato ma sad gamaya, Tamaso ma jyotir gamaya, Mrtyor mamrtam gamaya”, which he then translated as “Lead me from the unreal to the Real, Lead me from darkness to Light, and Lead me from death to Immortality.” Reciting from Bhagavad-Gita, he urged Councilmembers and others to keep the welfare of others always in mind.

Zed will read the opening invocation at Sparks City Council on January 24.