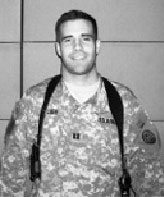 Cage attained the rank of Captain in the United States Army, serving in Iraq as recently as 2006. Captain Cage was awarded the Army’s Bronze Star Medal for his service in Iraq. He is a 2002 graduate of the United States Military Academy at West Point, New York.

“Caleb Cage is a dynamic leader with a terrific attitude,” Governor Gibbons said. “I am confident he will provide the veterans of Nevada with outstanding service and representation.”

“I am proud to serve the veterans of Nevada and I am equally proud that Governor Gibbons has shown his confidence in me,” Cage said.

Cage is a resident of Reno and has served as a member of the Nevada Military Support Advisory Board and the Reno Parks and Recreation Commission.