California Trail Center to present “The Truckees: an American family” 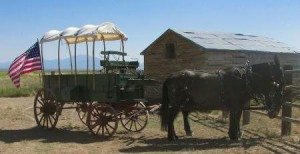 Cheyna Burton from the Great Basin Institute will give a presentation entitled “The Truckees: an American family,” on Wednesday, August 18, at the Elko California Trail Center.  During her 7 p.m. program, Burton will focus on three generations of Northern Paiute, and how each generation was impacted by the overland migration.

Burton will discuss Chief Truckee’s influence on the California Trail, and show how he positively impacted the lives of emigrants on the overland migration.  Burton will also examine the life of Chief Truckee’s granddaughter Sarah Winnemucca, and her fight for social equality.  In addition, she will discuss the differing views of each generation on the influx of white settlers to the region, and show how their lives and actions have influenced current Native American thoughts and ideals.

Chief Truckee was the father of Chief Winnemucca and the grandfather of Sarah Winnemucca.  He viewed the westward trek of non-Indians in a positive light, but his willingness to help the emigrants created friction between the chief and his son.   Chief Winnemucca remained suspicious of the emigrants, and of what their journey meant for the well-being of his people.   His daughter, Sarah, had to choose between these attitudes.  She fought for Native American rights her entire life, living in both the white and Native American worlds. Sarah was also fluent in several languages, including English and Spanish.

Operated by the Bureau of Land Management Elko District Office, the Elko California Trail Center is located just off Interstate 80, eight miles west of Elko at Hunter Exit 292.  Admission is free, and the Trail Center is open to the public Wednesday-Sunday, from 10 a.m.-5 p.m. through September 5.  After Labor Day the Center will be available to school groups and other organizations on a prearranged basis.  A meeting room is also available.  For more information about Burton’s presentation, current exhibits and future events, please contact the Trail Center at (775) 738-1849.