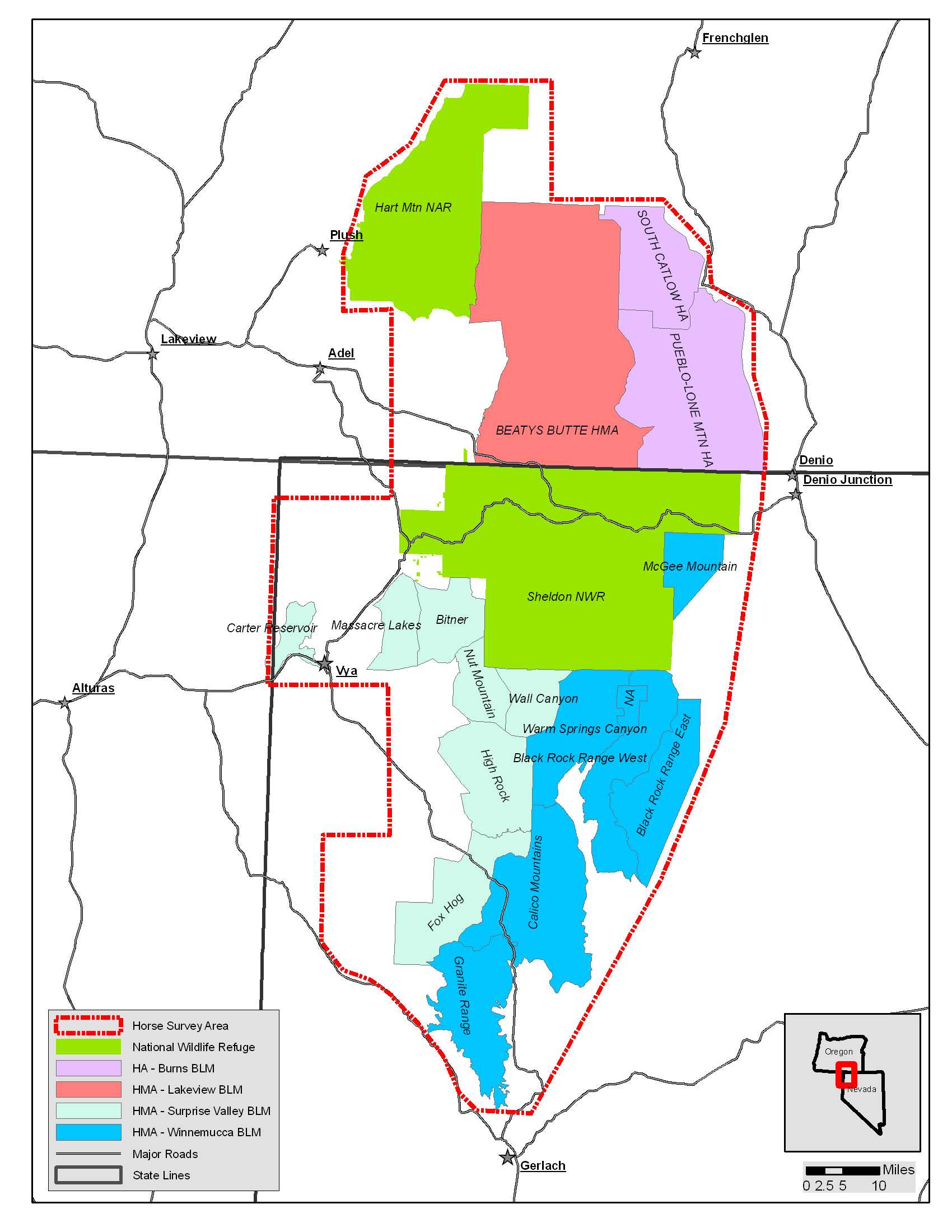 BLM and the U.S. Fish and Wildlife Service (USFWS) have combined forces to conduct a joint aerial population inventory of wild/feral horses on nearly four million acres of land located in northwest Nevada and southeast Oregon.  The survey will be conducted beginning June 20 and will last up to eight days, using a fixed-wing aircraft.

The goal of the cooperative interagency project is to improve wild/feral horse population counts, utilizing improved population survey methodology, in an area that has shown shifts in horse numbers and distribution.

“Past population surveys and management projects by BLM and the USFWS within the survey area have shown that animals may move between a number of BLM herd management areas and across the Sheldon and Hart Mountain National Wildlife Refuges,” said BLM Nevada State Director Ron Wenker.  “This joint effort will produce a base line count and distribution for the entire area as a whole.  We are planning to return in the fall for a second survey, where we will see how and where the herds moved, and how that affects population counts within the individual areas.”

The flight will encompass herd management areas (HMAs) administered by the BLM Winnemucca District in Nevada; the BLM Lakeview and Burns District Offices in Oregon; the BLM Northern California District Office in California that manages some of the HMAs within Nevada, and the two wildlife refuges managed by USFWS.  The U.S. Geological Survey (USGS), which conducted research into improving BLM’s population counts, will assist with the population survey by modeling and analyzing the data collected on the flight and providing a population estimate with a 95 percent confidence interval.

This improved survey methodology, called Simultaneous Double-Count with Sightability Bias Correction, uses two observers to independently observe and record data on groups of individual horses.  The methodology incorporates peer-reviewed techniques that have been used for decades to estimate wildlife populations around the world.  BLM specialists in Wyoming and Nevada have assisted USGS researchers since 2004 in developing and improving the inventory protocols.

Accurate wildlife population surveys are challenging, as they are very strongly dependent on skill of the individual observer, species surveyed and group size.  They are also affected by ruggedness of the terrain and vegetation cover.