As close as you can get to ringside 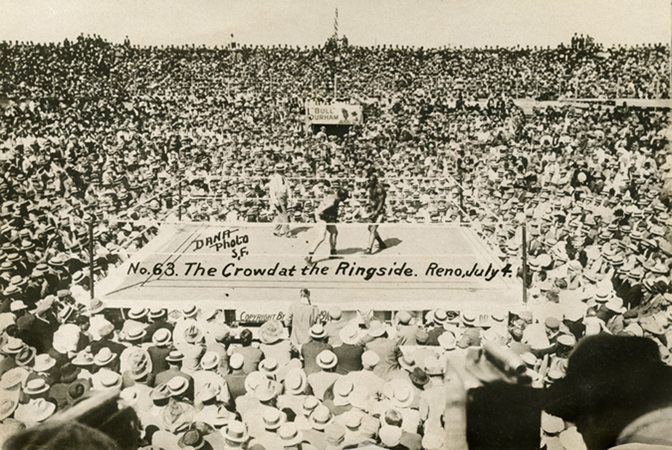 Reno, Nevada.  The Nevada Historical Society invites visitors to get as close as they can to ringside seats as historian Phil Earl presents a lecture on Jack Johnson’s career as a black fighter in the early 20th Century. The presentation is followed by a documentary on Jack Johnson which includes historical footage of the Johnson-Jeffries fight that took place in Reno, Nev. July 4, 1910.

This program is being held June 26 at 1:00 pm in the Historical Society’s Reno History Gallery. It is the second in a series of lectures commemorating the 100th Anniversary of the historic Jonson-Jeffries fight.

On July 4, 1910, Reno staged perhaps the most controversial boxing contest in American history.  The outspoken, reigning heavyweight champion Jack Johnson, the first African-American to hold the prized crown, overwhelmed his opponent Jim Jefferies, an undefeated heavyweight champion who had been coaxed out of retirement and dubbed “The Great White Hope.”

This program accompanies the exhibit “Johnson-Jeffries Fight: A Centennial Exhibition” a one-of-a-kind exhibit expressed through art, photography and ephemera in the Historical Society’s Hallway Gallery. The exhibit will run through July 30, 2010.

Phillip I. Earl is the emeritus Curator of History for the Nevada Historical Society where he spent over 30 years in service. He is a noted historian who has spent much time researching the history of the famous Jonson-Jeffries bout.

The Nevada Historical Society, located at 1650 N. Virginia Street on the UNR campus, was founded in 1904 and is the oldest state museum. Programs include an active exhibition schedule, public programs and docent-guided tours. The Historical Society’s Research Library, with its extensive collection of Nevada information and photographs, is open to the public from noon to 4 p.m., Wednesday through Saturday.  The exhibit galleries and museum store are open from 10 a.m. to 5 p.m., Wednesday through Saturday. Admission is $4 for adults ages 17 and over, children and members are free.