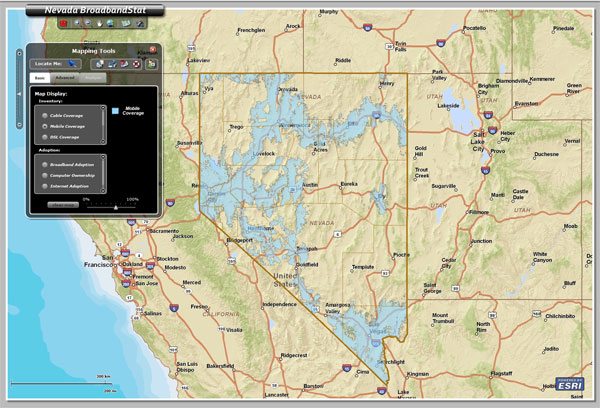 CARSON CITY – Governor Jim Gibbons today announced the rollout of Nevada’s broadband availability map aimed at promoting technology development and increasing high-speed Internet throughout the state.  “The map and the technology which will follow will create jobs to construct these critical networks, establish employment opportunities where they never existed before, bring a new level of economic competitiveness, allow e-government to be more fully deployed, will lower taxes by lowering the cost of government,  allow healthcare providers and caregivers to deliver world class services in every corner of the state, and most importantly, bring educational opportunities through distance-learning models for our children where such opportunities did not exist,” Governor Gibbons said.

Much like the revolutionary impact of harnessing electricity or the telephone, high-speed Internet connection is Nevada’s new lifeline to quality jobs, information, and vital services like telemedicine, e-government, and education. The map’s development, funded by a stimulus grant award, was developed through the Connect Nevada initiative by Connected Nation – Nevada’s designated entity under the grant award.  The Nevada Broadband Task Force, created in mid-2009, supported the development of the map along with other Task Force duties.

“Under the direction of Nevada’s Broadband Task Force, which I created by Executive Order in 2009, Nevadans will now have a map that not only puts information about available broadband services at their fingertips, but also defines where the state and the private sector need to focus their attention to bring high-speed Internet to every part of our State,” Governor Gibbons said.

In December 2009, Connect Nevada was awarded $1.4 million in stimulus funds for broadband mapping and planning in an effort to increase the availability and use of high-speed Internet service in the state. Utilizing that funding, Connect Nevada has been able to gather and verify state-specific data on the availability, speed, location, and type of broadband services as well as the adoption and availability of broadband at community anchor institutions across the state. These initial maps include data from more than 35 state providers. 97.29% of households have access to the minimum threshold for broadband at 768 kbps downstream (this does not include mobile wireless or satellite services.) There are approximately 21,000 unserved Nevada households of which 14,541 are rural. The grant calls for semi-annual updates to the map over a two-year period and planning efforts driven by the data for five years.

This data is accessible via Connect Nevada’s BroadbandStat interactive mapping tool at www.connectnv.org and will ultimately populate the comprehensive, interactive, and searchable national broadband map that NTIA is required by the Recovery Act to create and make publicly available by February 17, 2011. As the designated entity for broadband mapping in the state, Connect Nevada is a public-private partnership uniting local governments, businesses, and citizens in the goal of increasing broadband service in the state’s underserved areas.