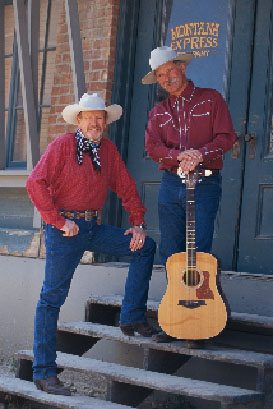 GENOA — The Genoa Cowboy Poetry & Music Festival opening is just weeks away from its April 29th start and the first act out of the chute is a treat for fans of both cowboy poetry and music, featuring the great western duo of Larry Maurice and Dave Stamey. If you have not heard their poetry and music, you are in for a treat. Both Larry and Dave have won the coveted ‘Will Rogers Award’ from the Academy of Western Artists and both split their time between being on horseback and being on stage, although Dave admits that he prefers facing an audience to being stomped by angry horses.

Larry is a local Northern Nevadan, and Dave, who has performed numerous times in Nevada including appearances at the fabled Elko Cowboy Poetry Gathering, is a close California neighbor. Joining Larry and Dave is Dayton, NV native and western balladeer Richard Elloyan. His Big Nevada Sky will make your skin tingle!

Their performance at festival’s main stage at Mormon Station State Park is slated for 7P on Thursday, April 29th and kicks off a schedule that includes performances by poets Waddie Mitchell and Paul Zarzyski, cowboy singer and Grammy nominee Don Edwards, Lacy J Dalton, David John & the Comstock Cowboys and a host of others. But the 4 day festival is much more! Over 80 workshops will be offered on everything from Dutch Oven Cooking to the Guns of the Old West, there are cowboy dinners each night, no less than three galleries featuring Western art and collectibles and the Native American Cultural & Historic Center.

The festival takes over the historic town of Genoa for four days, and a variety of daily passes for the workshops and tickets for headliner concerts are available at www.genoacowboyfestival.com. Special lodging rates are being offered at a variety of Carson Valley lodging properties including festival host hotels Carson Valley Inn and Holiday Inn Express.

Sponsored by the Town of Genoa and the Carson Valley Arts Council, those organizations would be happy to tell you all you need to know at 775-782-8696 or 775-782-8207, but find a way secure your tickets now to join in the fun April 29th-May 2nd at the Genoa Cowboy Poetry & Music Festival.