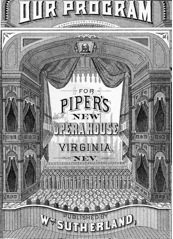 The Comstock Lode and Virginia City in its heyday still fascinates us today. When you look at items of the time – posters from Piper’s Opera House, photos of the lively saloons, Mark Twain’s articles in the Territorial Enterprise – you begin to imagine what it would have been like to have lived there, and perhaps even wish you could travel back and be part of it all, if only for a few days.

With this being the 150th anniversary of the discovery of the Comstock Lode, and Nevada celebrating its 145th birthday this month, the University of Nevada, Reno is inviting Nevadans to do just that. The University is providing a unique opportunity to take an up-close-and-personal look at such items and get lost in the era at a special exhibit in the Mathewson-IGT Knowledge Center titled, “Rush to Washoe: The Rise of the Comstock.” The exhibit’s curator is Jacque Sundstrand, the special collections manuscripts librarian.

The exhibit opens Oct. 5 and will feature many items from the monumental gold and silver mining strike, one of the richest in the world, including Mackay silver, maps of mining claims, stock certificates, mining company records, letters from miners and even the world’s oldest Tabasco bottle.

“These are primary materials,” stated Donnelyn Curtis, head of the University library’s Special Collections. “They are the voices and belongings of the people who were there.”

But, Curtis pointed out that, although it was the miners who produced the hundreds of millions of dollars of silver and gold over the 20-year history of the strike, others were also attracted to the bustling city.

“It became a Mecca for writers, artists and theater people of the time,” Curtis explained. “And, it was a true melting pot of the West, attracting immigrants from around the world – Chinese, Italian, Irish, Basque and others.”

The University’s exhibit also includes cultural and artistic items, such as Nevada’s earliest theater poster printed on silk, drawings, photographs and writings from the colorful Comstock authors, collectively known today as “The Sagebrush School.” Dan De Quille was an editor of the Territorial Enterprise and wrote The Big Bonanza, the classic account of the Comstock. But, many people don’t know that De Quill was also a classically trained artist. His only known painting was recently acquired by the University and will also be on display.

In addition, at 7 p.m. each Wednesday in October, the University will present “Comstock Conversations,” with noted local experts discussing various aspects of the era. On Oct. 7, Ron James, Nevada State Historic Preservation officer, will present “Bonanza! How Virginia City Has Touched the World for 150 Years,” showing the far-reaching impact of the Comstock.

On Oct. 14, Don Hardesty, Nevada professor of anthropology, will present “Mark Twain’s Comstock: the Archaeology of Early Virginia City,” shedding light on saloons, opera houses and ethnic groups during the era. He will be joined by Patty Cafferata, attorney and author of More than a Song and a Dance: The Heyday of Piper’s Opera House. Cafferata will present, “Behind the Scenes at Piper’s Opera House,” discussing the three Piper’s Opera House buildings and the entertainment presented in each.

On Oct. 21, Cheryll Glotfelty, Nevada associate professor of English, will present “The Comstock’s Literary Mother Lode,” discussing the rich literary work of the era’s “Sagebrush School” of engaging authors, including Twain, De Quille and others.

The Oct. 28 presentation will actually be a readers’ theater adaptation of a futuristic play of the era, The Psychoscope, which featured a frank depiction of a brothel that made the play very controversial at the time. Even in freewheeling Virginia City, the play only ran for one week. And, it is known to have been presented only two other times: in 1949 at the University during Mackay Days, and in 2004 at the Western Literature Association’s Conference. University faculty members David Fenimore and Ann Medaille will direct the dramatic reading.

The Oct. 28 performance will be in the Knowledge Center’s Wells Fargo Auditorium on the First Floor. All other Wednesday presentations will be in the Faculty & Graduate Reading Room on the Fourth Floor.

The exhibits will be on display through February in the Whittemore Gallery on the First Floor, and the Special Collections area on the Third Floor. The Nevada State Historic Preservation Office and the W.M. Keck Museum has loaned the University some special artifacts for the exhibits, and there are some special 3D images of the Comstock on view, courtesy of Howard Goldbaum, Nevada associate professor of Journalism.

All exhibits and presentations are free and open to the public. Complimentary parking is available in the Brian Whalen Garage. Go to www.knowledgecenter.unr.edu or call 775-682-5665 for exhibit hours or more information.

Reid: “I make absolutely no apologies”