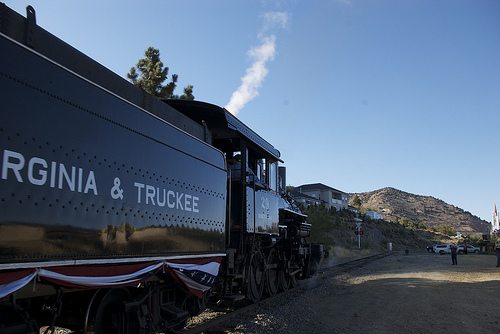 Northwestern Nevada has a major new attraction with the long-awaited opening of the historic Virginia & Truckee Railroad, rebuilt 71 years after being shut down. The railroad is now carrying passengers between the famous mining town of Virginia City and the state capital, Carson City.

Rides began Aug. 15 and will run Saturdays through Oct. 31, offering an opportunity to step back in time and experience rail travel as it was a century ago aboard vintage cars pulled by a steam engine. The newly rebuilt railroad, known as the V&T, carries passengers one way or round trip, chugging across 18.3 miles of mountainous high desert landscape. Watch for the legendary wild horses that roam the mountains and catch a glimpse of 19th century cemeteries and abandoned stamp mills that once crushed gold and silver ore.

Plenty of lodging is available in both cities, and parking is free at both train stations. What to do? Walkable Virginia City features wooden sidewalks lined with 19th century brick buildings that house museums, saloons, restaurants, cafes and shops that sell gifts, souvenirs, turquoise jewelry, ice cream, candy and pizza. If you hear the sound of gunfire in the street, it’s just Virginia City’s cadre of costumed Wild West characters staging a “shootout” for your amusement. The aura of bygone days is captured in mine tours, hillside cemeteries with iron-fenced plots and marble tombstones bearing soulful messages and mansions that display traces of the “Silver Baron’s” elegant lifestyles during the city’s heyday.

Carson City offers tours of the Nevada State Capitol, the Nevada State Museum and Mint that includes a walk-in mine shaft and ghost town, the Nevada State Railroad Museum where visitors can see vintage engines and ride a steam train around the grounds, The Children’s Museum of Northern Nevada, the Foreman-Roberts House Museum, Nevada State Library and Archives, the Stewart Indian School Campus, Cultural Center and Walking Tour, the Warren Engine Company No. 1 Museum and many fine restaurants, antique shops and casino entertainment.

The final train ride of the season, Oct. 31, coincides with the annual Nevada Day Parade and celebration of admission to statehood in Carson City.

The Carson City depot is just off U.S. Highway 50 on the eastern edge of town. (Turn south onto Flint Drive and east onto Eastgate.) Tickets are available at www.VisitCarsonCity.com or by calling 1-800-NEVADA-1 (638-2321). Prices are $29 one way for adults, $23 for children and $25 for seniors. Round trip prices are $48 for adults and $36 for children.

The original V&T Railroad was built in 1869 to carry gold and silver ore, lumber, steel and other supplies and passengers to Carson City, Reno and the Carson Valley. The last Virginia City-Carson City run was in 1938. In 1950, all runs ended and the tracks were dismantled. But Bob Gray reconstructed the V&T in 1974 in Virginia City and in 1980 began to run excursion trains two miles to Gold Hill. The Nevada Commission for the Reconstruction of the V&T rebuilt the remaining 16.7-mile route from Gold Hill to Carson City starting in 2005.