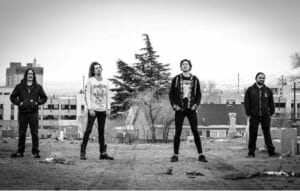 Coffin Raid is a death metal band from Reno, Nevada.

1. How did you get started and who are your fans?
We got started about a year ago when I asked my brother if he would record some drum tracks for some death metal songs I had been working on. Our chemistry is great, and it pretty much went from there. We’ve all been in previous bands – Impurities, Countress, and Thunderhead.

2. How would you describe your sound and style?
Sound and style-wise, we take a lot of influence from bands like Exhumed, Repulsion, Autopsy, early Napalm Death, Defecation, Impetigo, early Carcass, and also from old school death metal, grindcore and punk rock.

3. Who are you most inspired by?
Pretty much the same bands I said; getting loaded and playing loud until you’re deaf. Distortion ’till death and ban the head that doesn’t bang!

4. Where do you see yourself in five years?
We have some stuff in the works – new recordings and hopefully some extensive touring.

5. How can people get a hold of you?
We have a bandcamp site and a Facebook page – make sure you visit both and share ‘em, you squares. People can email me directly at [email protected]